A MONTH after the deadline for filing of candidacies for next year’s polls, supporters of Davao City Mayor Rodrigo Duterte continue to try and convince him to run for President—and they are receiving ample help from the man himself who denies he is running but would talk for half an hour about his platform and solutions to the country’s problems.

Duterte, the guest of honor at the postbirthday party of vice presidential candidate Sen. Alan Peter Cayetano on Monday at the Cayetano home in Taguig City, added to speculations he would run when he opened his speech by saying the presidency was destiny and what God wants he will accept.

“I have enough accolades to last me a lifetime. But if God puts me there and you put me there, it’s destiny,” Duterte told Cayetano’s guests composed of top businessmen, former military officers and politicians of various stripes.

“Ten percent really will be my decision, but whatever it is, the 90 percent will belong to God,” he said.

Duterte, who said he was supporting the vice presidential bid of Cayetano, asserted that what he would want to change is the attitude of some Filipinos who had lost the fear of being sanctioned.

“No more fear to commit wrong. Obedience to the law today is just really an option. If you don’t want to follow it, fine. Kung malakas ka naman, mayaman ka, milyonaryo ka (If you are influential, rich, a millionaire) you can do that. Whatever smuggling OK din iyan, alam mo lulusot ka (you know you’ll get away with it),” he said. 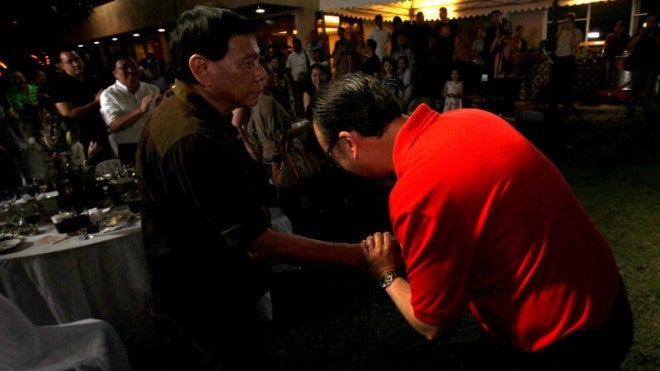 THE BIRTHDAY BOY, BOW! Vice presidential contender Sen. Alan Peter Cayetano bows to his guest, Davao City Mayor Rodrigo Duterte, during the senator’s 45th birthday party on Tuesday in Taguig City. Cayetano met with Duterte in September to discuss their possible team-up but the mayor has repeatedly said he is not running. RICHARD A. REYES

Duterte added to the speculations about his plans when he said, “Huwag kang magsalita ng tapos sa amin. Ibig sabihin the will of God (Don’t rule anything out. I mean the will of God).”

The mayor, who is known to talk tough, said that if he decided to run for President and won, “I will not settle for nothing happening on my watch.”

“You know, what you are asking me to do really is gamble with my freedom. I fear that I will fail and I don’t want to be humiliated for not being able to stop all the crimes and misery of the people,” he said.

Cayetano, in his response to Duterte’s speech, asked the mayor to take a chance.

“The point, mayor, is that we don’t have a choice. We keep telling people we want real change but they’re not given real choices,” Cayetano said. “Give us a choice for 2016.”

When asked what he discussed with Duterte, Cayetano said he believed Duterte was really concerned about his family but he was also pondering solutions to the country’s problems.

“I think that I am smart enough to know that anything I might say he has already heard, any kind of political computation and support and scenario building. I am just there to continue to assure him that if he decides, we will have people who will think of programs, who will get his ideas and put it into a system,” Cayetano said.