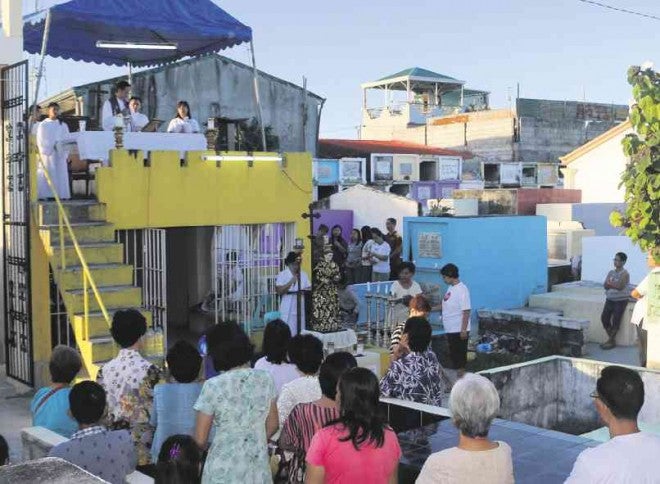 ALL SOULS’ DAY is observed for a day, Nov. 2, by Roman Catholics in the Philippines. But in one of Pampanga province’s oldest communities, Betis, the living go to cemeteries for nine days to be with their departed loved ones, culminating the unique tradition on Nov. 10 with a Mass and blessing of tombs. TONETTE T. OREJAS/INQUIRER CENTRAL LUZON

GUAGUA, Pampanga—While most Roman Catholics in the Philippines honor their dead loved ones for a day or two every November, residents in the old district of Betis here do it for nine consecutive days, ending it just on Tuesday.

The country’s longest feast of the dead—daun to the Kapampangan or undas to the Tagalog—showed to be persisting even amid the barrage of afternoon telenovela, preoccupation with work or unpredictable weather.

On Tuesday, about 200 residents capped the feast with a 6 a.m. Mass that Msgr. Gregorio Canlas held in the middle of the Betis Catholic Cemetery. Later, lay leaders spread out, blessing the more than 2,000 graves with holy water, with one dating back to 1868.

“We pray for the purification of their souls, that from purgatory, they unite with God,” Canlas said, explaining the purpose of the Mass for the departed, the high point of the Betis daun.

Theirs is a daily ritual of going to the cemetery starting late in the afternoon, lighting candles, offering flowers and praying the rosary without fail. Those busy with work and other things ask their relatives to do the tasks on their behalf as an expression of love.

“Only Betis seems to have kept the tradition of going to the cemetery during the novena [for the dead],” said Pampanga Auxiliary Bishop Pablo Virgilio David, a native of Betis.

Two gates to the cemetery announce a reminder: “Aku ngeni, ika bukas (Death is mine now, it will be yours tomorrow).”

No archival documents explain the roots of the nine-day feast, said Nina Tomen, who cowrote the book “Suli” (Legacies of Santiago Apostol Church of Betis). Neither do older residents.

“We just grew up observing this tradition,” said Consuelo Mendoza, 83, a granddaughter of Lorenzo Pecson, one of the early devout Catholics in the district.

Mendoza recalled that when she was a child, the dead were buried under the earth. “We had only these concrete niches and tombs soon after the Pecson-Coronel mausoleum was built,” she said.

Many old tombs were buried by volcanic sediments from Mt. Pinatubo’s 1991 eruptions.

While the tradition lives on, Mendoza misses the decenario, a long prayer for the dead that the faithful recite in a slow procession to the cemetery every day for the nine days following the burial of a loved one.

What also lives to this day is the lukas-paldas, a period when bereavement is ended on the 40th day since a loved one has passed.

Canlas, 73, has no answer why the rite exists only in Betis. It must have been the deep religiosity of Betis residents that birthed the tradition, he said.

Betis, a mission chapel of the Sto. Niño de Tondo built by Augustinian friars in 1572, was annexed to Guagua town in 1904. The district has produced priests and artisans, and maintains a church declared by the government as a national cultural treasure.