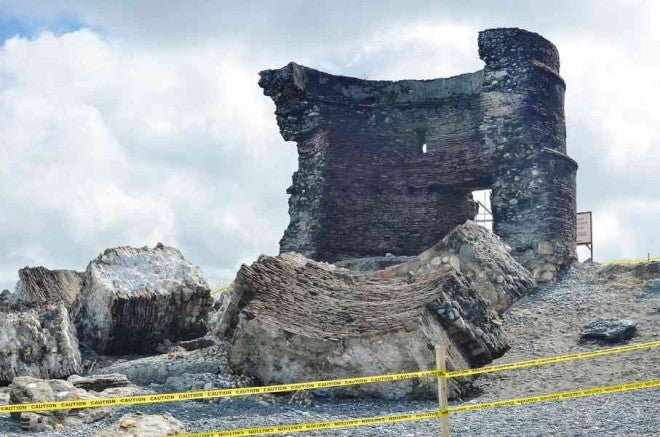 THE LOCAL government of Luna, La Union province, has cordoned off the area surrounding the collapsed “baluarte” (watchtower) to protect what remains of the town’s most popular tourist attraction. PHOTO COURTESY OF LUNA TOURISM COUNCIL

DAGUPAN CITY—Officials and residents of Luna town in La Union province have asked authorities to act fast to prevent further damage to the 400-year-old “baluarte” (watchtower), the half part of which collapsed as strong waves battered the town’s coastline during the onslaught of Typhoon “Lando” (international name: Koppu) last month.

Luna Mayor Victor Marvin Marron said chunks of the Spanish-era structure now scattered on a beach in Barangay Victoria could be dragged by strong waves into the sea if the area would not be secured and protected soon.

Half of the 5.6-meter high baluarte remains standing but since it sits on an unstable base, there is danger it will also collapse, he said.

“We have cordoned off the ruins and put warning signs to stone collectors against getting pieces of the fallen baluarte,” Marron said on the telephone.

The baluarte, which sits on a beach facing the West Philippine Sea, served as a fortress or a structure used for defense. The Spaniards used the structure to warn residents of pirate attacks, historical accounts showed.

Days after the collapse was published in the Inquirer last month, personnel from the National Museum went to the town to assess the damage on the structure, which is made of adobe and coral bricks held together by lime and egg white.

The local government planned to protect the section still standing, such as putting boulders or rocks around the area. As for the fallen pieces, Marron said, these would be kept on higher ground or where the base was stable and would not be scoured by strong waves.

He said these plans would need around P3 million.

Restoring the structure to its original appearance will take a much bigger amount as it will entail the reconstruction and strengthening of the structure’s foundation.

In 2013, AMH Philippines Inc., a consultancy firm based at the University of the Philippines Diliman in Quezon City, conducted a feasibility study to preserve the structure. It recommended jet grouting, or injecting cement slurry (a mixture of cement, sand and water) through high-pressure pumps, to fill spaces in the sand and stabilize the ground condition.

Concerned agencies, however, did not act on the recommendation until Lando came and toppled half of the baluarte.

“But perhaps what happened was a blessing in disguise because it caught the attention of concerned agencies like the National Museum, and [they] would implement projects that would restore and protect it,” Marron said.

The National Museum also recommended that the engineering offices of La Union and Luna prepare proposals, including the design, for the restoration of the structure.

The proposals will be submitted to the National Historical Commission of the Philippines, the Tourism Infrastructure and Enterprise Zone Authority, and the National Museum.

“The baluarte is a national treasure and a pride of our town. I hope everything would be done to restore it,” Marron said.