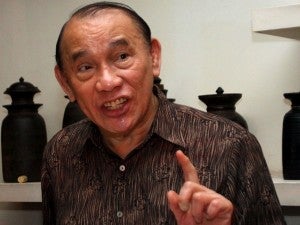 At least 300 people, mostly friends and colleagues in the labor sector, including former labor secretary Ruben Torres, attended the funeral, from the Requiem Mass at the St. Therese of the Child Jesus Parish in Lahug, up to the cemetery, where he was buried at12:15 p.m.

Herrera died of heart attack in a hospital in Manila on October 29  at the age of 73. His body was flown to Cebu last November 4 for a seven-day wake at the  the Cosmopolitan Funeral Homes in Nivel Hills, Cebu City.

Among those who paid their last respects were Bohol Governor Edgar Chatto and some mayors in Bohol where Herrera grew up.

“As they say, he was a titan in the labor sector and that’s his biggest legacy,” Ernest said.

Ernest, the former mayor of Calape, Bohol, said he would work to preserve the legacy of his father whose last wish was for him to follow his footsteps in the labor sector.

Around two months before his death, Ernest said his father told him to be active in the Trade Union Congress of the Philippines (TUCP), which has split into two factions – his father’s group and the group of lawyer Democrito Mendoza.

He said the Herrera faction of the TUCP Partylist has tapped him as their second nominee.

“My father wants me to be active in TUCP. Of course, it’s so hard to fill in his shoes but I’m learning. It would be a very hard responsibility and I will be trying my best to cope with all issues,” Ernest said.

Ernest said his father was instrumental in the passage of some important laws like the maternity leave benefits and the creation of the Technical Education and Skills Development Authority.  SFM