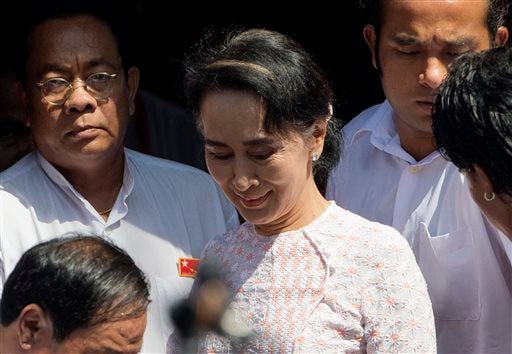 Leader of Myanmar’s National League for Democracy party, Aung San Suu Kyi, leaves her party headquarters after delivering a speech to her supporters in Yangon, Myanmar, Monday, Nov. 9, 2015. Suu Kyi on Monday hinted that her party will win the country’s historic elections, and urged supporters not to provoke their losing rivals. AP Photo/Mark Baker

YANGON, Myanmar — Opposition leader Aung San Suu Kyi’s party said Monday that it has won 56 of the 57 parliamentary seats from Myanmar’s main city of Yangon, a result that portends a massive sweep in historic elections that could eventually give it the presidency next year.

The National League for Democracy announced that it had won 44 of the 45 lower house seats and all 12 of the upper house seats from Yangon, a party stronghold.

As the results were announced, huge cheers broke out among the crowd of red-shirted supporters outside the party headquarters.

The Yangon result was not announced by the government’s Union Election Commission, but the NLD has stationed representatives at counting centers and is keeping reliable tallies that are being relayed to the headquarters. The election commission has been slow in releasing the numbers.

Earlier, Suu Kyi, the Nobel Peace Prize laureate and pro-democracy icon, urged supporters not to provoke losing rivals who mostly represent the former junta that ruled this Southeast Asian nation for a half-century.

Hours before the Yangon announcement, party spokesman Win Htein said the NLD had won about 70 percent of the votes counted by midday. Another spokesman, Nyan Win, put the number at 90 percent.

“We will win a landslide,” Nyan Win told The Associated Press.

The comments, if confirmed by official results from Sunday’s general election, indicate that Suu Kyi’s party would not only dominate Parliament, but could also secure the presidency despite handicaps built into the constitution.

“I want Mother Suu to win in this election,” said Ma Khine, a street vendor, referring to the 70-year-old Suu Kyi with an affectionate term many here use. “She has the skill to lead the country. I respect her so much. I love her. She will change our country in a very good way.”