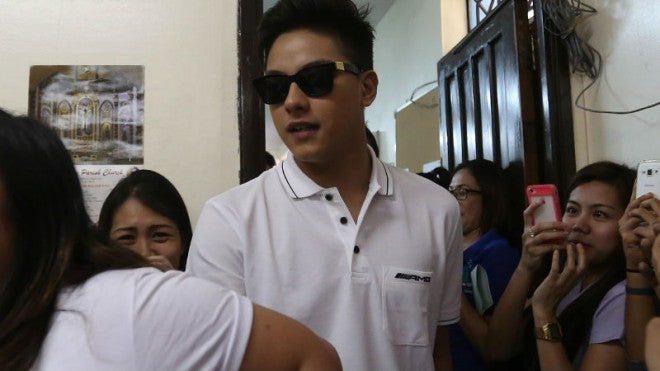 STRUGGLING to find a common touch with the masses, Liberal Party (LP) standard-bearer Mar Roxas has tapped the drawing power of young show biz star Daniel Padilla in an attempt to capture a younger segment of the electorate in 2016.

The Team Daang Matuwid spokesperson, Barry Gutierrez, on Sunday said the ABS-CBN contract star was “recruited” to help bolster Roxas’ image with the “masa audience,” especially his legion of fans among the youth.

But Gutierrez insisted that the hiring of the 20-year-old Padilla as Roxas’ first celebrity endorser did not mean the LP was already abandoning its issue-based platform and message. “The substance of the campaign is still there,” he said in a phone interview.

“We want him (Padilla), as a matinee idol, to draw people in and engage them in a discussion of the important issues,” Gutierrez said. “Initially, we want to attract his fans to our message.”

On his Twitter account, Padilla recently posted a link to a YouTube clip of himself receiving Roxas at his home and asking the candidate questions about Metro Manila traffic, one of the concerns that, he said, the youth were interested in.

In the three-minute video, Roxas talks about what he sees as solutions to the traffic congestion, including the ongoing construction of the North Luzon and South Luzon Expressway connector, expansion of the light rail transit system, and better enforcement of rules governing bus franchises.

These projects would be completed soon and he predicted a better traffic situation in the capital, Roxas said.

In another short video, the candidate is seen answering questions of Padilla and his mother, Karla Estrada, about the rehabilitation of Tacloban City, which bore the brunt of the devastation of Supertyphoon “Yolanda” (international name: Haiyan) in 2013.

The former interior secretary spoke about Tacloban’s slow rise in the aftermath of the storm and the “build back better” thrust of the government’s reconstruction effort.

Gutierrez said the campaign meant to capitalize on Padilla’s popularity to reach an audience that normally would not listen to Roxas’ platform.

Criticized for being aloof and elitist, Roxas, a Wharton economics graduate and former investment banker, has been trying to project a warmer, more personable image in his recent public appearances. He is currently third in the latest surveys, but not far behind front-runner Sen. Grace Poe and Vice President Jejomar Binay.

Gutierrez said the hiring of celebrity endorsers was not aimed at countering the show biz connections of Poe, the adopted daughter of the late actor and defeated presidential candidate Fernando Poe Jr. and actress Susan Roces.

But he acknowledged Poe’s deep links to the movie industry as a result of her personal ties and her stint as chief of the Movie and Television Review and Classification Board.

“What we’re trying to do is really to broaden our access to this audience,” Gutierrez said.

Asked how much Padilla was paid to endorse Roxas, Gutierrez said he was not privy to such discussions. He also could not say who the other celebrities being considered to endorse Roxas were.

He denied rumors that the LP had also tried to get the endorsement of the popular “Aldub” tandem of Alden Richards and Maine Mendoza on “Eat Bulaga,” GMA 7’s long-running noontime show.

“From the start, we never considered them because we know how they are closely associated with Sen. Tito Sotto,” one of the hosts on Eat Bulaga, Gutierrez said. Sotto, who is seeking reelection, is a member of the Nationalist People’s Coalition, whose leadership has all but officially announced its support for Poe’s candidacy.