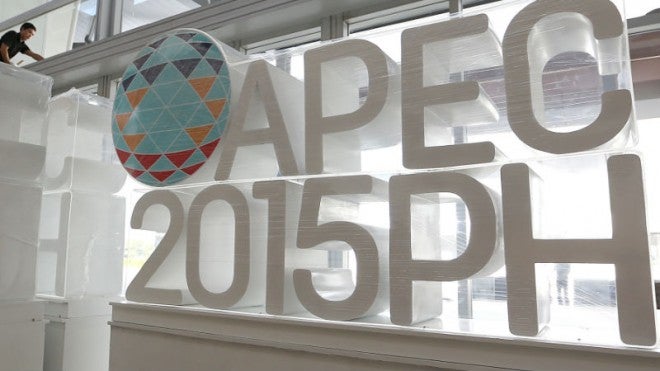 WITH A budget allotment of P10 billion for the yearlong hosting of the Asia-Pacific Economic Cooperation (Apec) meetings, the Philippines sees this huge undertaking as a long-term investment.

At least 47 meetings shall have been held before the big event on Nov. 13-19 when the Philippines takes the limelight in hosting the huge trading bloc, composed of 21 economies in the Pacific Rim.

The world will see 21 leaders, including powerful nations like the United States, Russia, Japan and China, coming together under one roof to tackle economic issues in the Asia-Pacific region.

“That is an investment. It is something that stems out of our own membership in multilateral forums,” said Ambassador Marciano Paynor, Jr., director general of the Apec 2015 National Organizing Council (NOC).

“If we think that we need not spend all this money, then let’s not be members of the Apec, UN, (United Nations) or Asean (Association of Southeast Asian Nations) and just be like a hermit kingdom,” he said.

The NOC was created solely for the hosting of Apec, a regional forum promoting free trade and economic cooperation in Apec, of which the Philippines is a founding member.

A P9.8-billion budget has been appropriated for the hosting of the Apec meetings this year, according to the Department of Budget and Management.

The money came from the Department of Foreign Affairs’ international commitments fund in 2014 and 2015. It does not include those tucked in the budgets of other government agencies.

Paynor said the funds allocated for the Apec meetings were indeed huge by Philippine standards but it was a small fraction compared with the expenses of other countries that hosted past meetings.

He cited as an example China, which spent $95 million just for the landscaping of the venue of the Apec summit by Yanqi Lake, 50 kilometers north east of Beijing.

Mainly for the summit, China built a special conference center, a waterfront boutique hotel and VIP villas. Other media reports said it spent $6 billion on the preparations for the summit of Apec leaders.

Paynor said Mr. Aquino made a directive in the early part of the preparations for the Apec hosting that no white elephants would be built. “We all know that we can do it properly with the existing facilities that we have,” he said.

For the Apec economic leaders’ summit on Nov. 18-19, the Philippine International Convention Center (PICC), a 4-decade-old building at the Cultural Center of the Philippines complex in Pasay City was chosen to be the venue.

Why host Apec? Paynor said it was both a duty and a privilege for the Philippines to do it the second time since 1996 when 18 world leaders, including then US President Bill Clinton and Chinese President Jiang Zemin, attended the high-profile meeting at the former US naval base in Subic Bay, Zambales.

“Why do we need to do this? It stands to reason that we should be a member of this. Our trade with Apec economies constitutes 80.7 percent of all the Philippine trade,” he said. The top five major trading partners of the Philippines are Japan, China, the United States, Singapore and South Korea—all Apec member-economies.

Tourists from Apec countries represent 80.81 percent of total tourist arrivals in the country.

In terms of international aid, Apec economies accounted for half of the total official development assistance to the Philippines.

“So why shouldn’t we give it importance? Do the common people feel it? Yes, they do,” Paynor said. “Part of what this organization does is to enhance business.”

Among the notable achievements of the Philippines’ 1996 hosting was the formation of the Apec Business Advisory Council (Abac).

“President Ramos felt then that public policy must also come from those who will implement it,” said Paynor, who was Malacañang’s chief of protocol at the time.

Each Apec economy has formed an Abac, consisting of up to three business people appointed by the leader of the member economy. For the Philippines, the council is composed of A. Magsaysay Inc. president Doris Magsaysay-Ho as chair; and Ayala Corp. chair and CEO Jaime Augusto Zobel de Ayala and CEO of Jollibee Foods Corp. Tony Tan Caktiong as members.

The output of Apec 1996 was the adoption of the Manila Action Plan for Apec, which outlined concrete steps and timetables for the reduction in tariff rates of each member economy. “This has helped increase market access for the Philippines in global trade,” said a briefer released by the Apec NOC.

Apec 2015 also aims to make a similar feat, especially with the two important road maps, the Cebu Action Plan that promotes financial integration, and the Boracay Action Agenda that is aimed at helping micro, small and medium enterprises (MSMEs) gain access to the global market.

Measures under the Boracay Action Agenda include simplifying and streamlining procedures, documentary requirements, customs-related rules and regulations for MSMEs.

“We are looking at the simplification of rules so people who would want to do business will find it easier to start and sustain their business,” said Laura del Rosario, foreign undersecretary for international relations.

From being a forum where trade and business issues are tackled, Apec through the years since its creation in 1989 has also covered social issues. The MSME agenda are part of the overarching theme of Apec 2015.

“We are tackling the social side of trade and investments, and also looking at environmental impact, how growth can be more inclusive, how the wealth we are creating leads to inclusive growth,” Del Rosario said.

Apart from the MSMEs, part of the main goals of Apec is to invest in human capital and the service sector.

For the Philippines, the service sector accounts for more than half of its economic growth. Thus, for this year’s Apec, it advocates the easy movement of services from one border to another in the Asia-Pacific.

“Services will be a big part of trade. Eventually, this will be part of the economic agenda,” Del Rosario said.