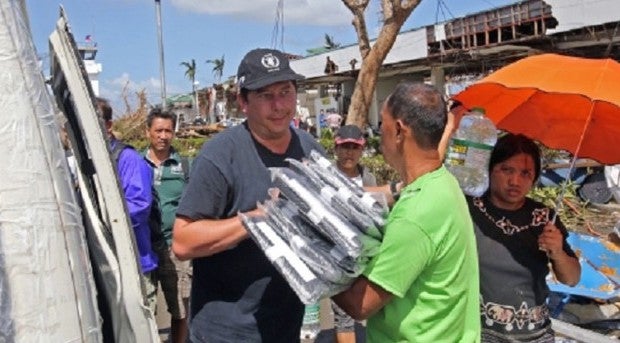 TACLOBAN CITY—Even as thousands of disgruntled survivors on Sunday marched in the streets of cities hit by Supertyphoon “Yolanda,” the opposition mayor of the storm’s ground zero urged reconciliation on the second anniversary of its devastating onslaught, expressing gratitude for the Aquino administration’s assistance.

“On behalf of the city of Tacloban, I would like to thank the national leadership, including the President, for all the help given to Tacloban,” Mayor Alfred Romualdez said in remarks at the unveiling on Sunday of a memorial in the Tacloban Convention Center, which served as an evacuation center during the disaster.

“Please forgive us if we have said something hurtful because we are just human and we got hurt because what happened to us was truly painful,” he said. “At no given time were we ungrateful for all the help that was extended to us.”

He later told reporters: “I’d like to reach out to everybody, tell them that we are very grateful. We just voice out our concerns, but it does not mean that we’re ungrateful.”

Romualdez, a nephew of former first lady Imelda Marcos, figured in a widely publicized spat uploaded on YouTube with then Interior Secretary Mar Roxas, who demanded a letter from the mayor asking the national government to take control of disaster relief.

“You have to understand. You are a Romualdez and the President is an Aquino,” Roxas said. “If it’s not legalized, then OK you are in charge … . Bahala na kayo sa buhay n’yo (You’re on your own).”

The bodies of victims were still being uncovered two years after the tragedy. On Saturday, five bodies, believed to be Yolanda victims were found at the coastal Barangay 87 in Tacloban, which bore the brunt of the storm’s devastation.

Organized by leftist groups, some 10,000 typhoon survivors marched in Roxas City in Capiz province, and in neighboring Iloilo and Aklan, denouncing corruption, politicking and delays in the distribution of shelter assistance.

At the unveiling of the memorial at the convention center in Tacloban, however, there was only a quiet, almost solemn but painful, recollection of the tragedy, summed up in the lament of Joilet Apilar, whose husband, Rolando, 51, was among those listed as missing.

“I am still hurting. It may be two years ago since we lost him but we deeply miss him. What hurts us more is up to this time, we don’t know where his body is,” said Apilar, 40, a mother of three children, one of whom has a physical disability.

Apilar, a city government employee, was among the 3,000 people who gathered at the unveiling of the P5-million memorial. The 7-meter steel sculpture shaped like the No. 8, the date the typhoon struck, stands on a 225-square-meter lot where the names of the 2,300 fatalities are inscribed on plant boxes around the park.

The ceremony was attended by Vice President Jejomar Binay, Senators Ferdinand “Bongbong” Marcos Jr. and Gregorio Honasan, and representatives of embassies of the United States, Turkey, Indonesia and Australia, and international nongovernment organizations.

At 6 p.m. on Sunday, thousands of residents lit 50,000 candles along a 24-kilometer stretch from Tacloban to the nearby towns of Palo, Tanauan and Tolosa.

For the second year in a row, President Aquino was absent from Sunday’s ceremonies in Tacloban. He attended the wedding of tycoon Andrew Tan’s youngest son, Kester, who married Singapore-based Kelsey Cheng at St. Therese of the Child Jesus Shrine in Newport City, Pasay City.

But, the President issued a statement that was read by his spokesperson, Edwin Lacierda, on government-run Radyo ng Bayan, in which he asked for prayers for the victims and paid tribute to those who helped Eastern Visayas rise from its fall.

“Today, we commemorate how our country and the world came together to face the challenges of the strongest typhoon in history, Typhoon Yolanda,” Mr. Aquino said.

“We pause in prayer for the loved ones we lost, and pay tribute to the soldiers and civilians who placed themselves in danger to help their fellow man,” he said.

“May the memory and lessons of that time inspire us to persevere in building back better, and in living up to the solidarity, resilience and generosity of Filipinos from all walks of life demonstrated not only then, but in all times of challenge and adversity,” Mr. Aquino said.

He said God’s grace “has enabled our country to ease the sufferings of those who lost everything in Yolanda, and reestablish communities that are once again working to have a safer and prosperous future.”

The President acknowledged international aid coming from other countries and multilateral agencies.

“This would not have been possible without the world’s embrace of our people and our people’s own heroic generosity and sacrifice,” he said. “The Filipino people will never forget the kindness that allowed us to overcome this tragedy and are resolved to be there for nations and peoples similarly affected by tragedy.”

Last year, the President also skipped ceremonies in Tacloban. Instead, he went to Guiuan, Eastern Samar, where Yolanda made its first landfall. Tacloban is controlled by the Romualdez family, with whom the Aquinos have had a bitter feud since the martial law years.

During a pastoral visit to the Philippines in January, Pope Francis braved an approaching typhoon and flew to Tacloban to preside over a Mass at the city’s ruined airport, thronged by 200,000 people, many of them with tears in their eyes.

“When I saw from Rome that catastrophe, I felt that I had to be here,” Francis said in his homily.

Lacierda acknowledged criticisms about the slow pace of the reconstruction and rehabilitation effort, noting the severity of the damage Yolanda left behind. “Of course there are those of the opinion that [rehabilitation] has been slow,” he said.

“We understand those who say that … . But there are others, including the United Nations, who say that the action of the Philippine government, as well as local governments, in Yolanda-affected areas has been faster than in other countries,” he said.

He said the government was doing its job in spite of what critics were saying.

Lacierda said many towns in Leyte and Samar were already recovering, including the reconstruction of public markets, municipal halls and civic centers. “That’s what we have done, and we continue to help the people and communities affected by Typhoon Yolanda,” he said. With reports from DJ Yap in Manila, and Nestor P. Burgos Jr., Inquirer Visayas