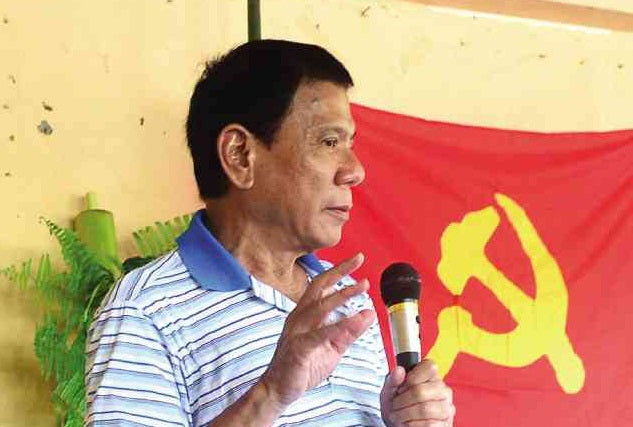 DAVAO CITY—Mayor Rodrigo Duterte admitted calling out “Mabuhay ang NPA” during the release of two government soldiers in the mountains of Laak, Compostela Valley, on Tuesday.

The communist New People’s Army (NPA) had seized Pfc. Niño Alavaro and Pfc. Marjon Añover at a guerrilla checkpoint in Monkayo, Compostela Valley, on Sept. 30 and held them for investigation for “crimes against humanity” and “counter-revolutionary activities.”

“Mabuhay ang NPA, and I will not take that back,” Duterte repeated during his Sunday television program “Gikan sa Masa, Para sa Masa.”

But Duterte explained that his commendation of the communist rebel movement was in recognition of its “fair treatment” of “prisoners of war.”

The NPA surrendered its captives to Duterte.

“Wala akong nakita na inabuso nila na bihag (I have not seen any captives that they abused). Because they say they follow the Geneva Convention,” Duterte said.

The controversial mayor said he believed the NPA was “religiously following” international law when it came to handling captured policemen and soldiers.

“I salute you because you handed over the captives,” Duterte said, adding that he also jokingly chanted “Mabuhay si Duterte,” which got a favorable response from the NPA rebels.

“Bantay lang kayo sa (keep watch during the) election,” he told them in jest.

Duterte said that because the war with the communists could not be stopped, he was happy to at least know that the guerrillas treated “prisoners of war” according to the Geneva Convention.

He said negotiations for the release of the captive soldiers were channeled through the National Democratic Front (NDF), the political arm of the Communist Party of the Philippines, and not the NPA, the rebel’s military arm.

“You don’t deal with the NPA… you negotiate with the NDF,” Duterte said.

The NDF is the body that represents the communist movement in peace negotiations with the government.

Peace advocates have called on both the government and the NDF to resume stalled negotiations and to address the root causes of the conflict.

In The Hague Joint Declaration in 1992, both parties agreed to tackle issues such as human rights and international humanitarian law, socioeconomic reform, political and constitutional reform, the end of hostilities, and the disposition of forces.

In March 1998, both parties signed a Comprehensive Agreement on Respect for Human Rights and International Humanitarian Law.

The government and the NDF had formulated their drafts for a Comprehensive Agreement on Socio-Economic Reforms when the peace talks hit a snag.

The CPP-NPA insurgency is considered one of the longest running communist rebellions in Asia.

Duterte: ‘Hail NPA’ comment is for fair treatment of soldiers
Duterte to NPA: Let’s prepare for a peaceful life during my presidency