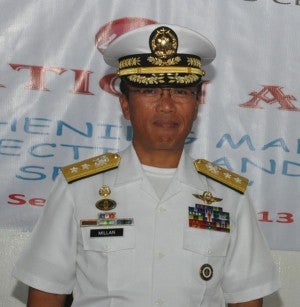 Jesus Millan when he was rear admiral of the Navy.  FILE PHOTO

MANILA, Philippines — The former chief of the Philippine Navy has been named as officer in charge for public, veterans and retiree affairs of the Department of National Defense.

Jesus Millan, a retired Navy Flag Officer in Command, has taken over the office formerly held by then undersecretary Eduardo Batac.

DND public affairs service chief Arsenio Andolong said Millan’s appointment as undersecretary had not been signed by President Aquino, as of Sunday, although he has started serving as OIC of DND veterans’ office.

The Office of the Undersecretary for Public, Veterans and Retiree Affairs has administrative supervision over the Philippine Veterans Affairs Office and the DND’s Public Affairs Service.

In August, Batac resigned his post due to personal and health reasons after taking a leave of absence.

Millan is a member of the Philippine Military Academy Class of 1982 and was a decorated naval officer before being chosen to lead the Philippine Navy.

“He was firm but approachable, and he played a significant role in the Navy’s force development,” Andolong said.  SFM