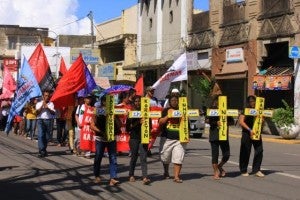 ILOILO CITY– Some 9,200 typhoon survivors and their supporters on Sunday joined rallies on Panay Island marking the second anniversary of Supertyphoon “Yolanda.”

The survivors from different towns in Capiz converged in Roxas City for a protest march on the city’s main streets.

The protesters decried cases of corruption, politicking and delays in the distribution of shelter assistance by the government.

They also called for the scrapping of Memorandum No. 24 of the Department of Social Welfare and Development, which has prescribed guidelines on qualification of beneficiaries of the Emergency Shelter Assistance.

Under the memorandum, survivors whose houses were destroyed or damaged in the supertyphoon are ineligible to receive cash assistance if their family has a monthly income of more than P15,000 and if they are residing in areas considered as danger zones including those 40 meters from the coastline.

Survivors who have received full shelter subsidy from non-government organizations also cannot receive the cash grant of P30,000 for those whose houses were destroyed and P10,000 for those with damaged ones.

Capiz was among the provinces worst hit by “Yolanda,” which packed winds with a velocity reaching 300 kilometers per hour.

In Iloilo, about 2,500 survivors in Estancia town in Iloilo and 700 in Iloilo City joined separate protest rallies led by Bayan and Task Force Buliganay.

The protest action in Iloilo City pushed through even if the city government did not grant a permit for the protesters to march along the city’s main streets.

Fr. Marco Sulayao, spokesperson of the Kusog sang Pumuluyo, a Panay-wide alliance of survivors of the supertyphoon and their supporters, decried the denial of the permit.

“The activity is being held on a Sunday with the least traffic but we were told to hold our protest at the public plaza of La Paz District away from the city center. This is contrary to our purpose of publicly and widely airing the situation and sentiments of those worst affected by disaster,” Sulayao told the Philippine Daily Inquirer.

In the capital town of Kalibo in Aklan, about 1,000 survivors and protesters led by Bayan marched long the town’s main streets before holding a rally at the Crossing Banga-New Washington.

In the morning, around 100 survivors joined a protest run from the Pastrana Park to the Kalibo-Numancia Bridge. Protesters also released two miniature fiberglass boats at the Lagatik River in New Washington town. Written on the boats were the words “Justice for ‘Yolanda’ victims.”  SFM

Read Next
3 Abu Sayyaf bandits killed, 3 soldiers hurt in Basilan clash
EDITORS' PICK
Acer Philippines welcomes you to its first flagship store
New Year, New Rediscoveries
Biden says Covid-19 expected to kill ‘well over 600,000’ in US
UP president challenges AFP claim on Reds’ campus infiltration
WHO says fabric facemasks still work against virus variants
Is your company a growth champion? Stand up and be recognized!
MOST READ
Cop, 12 others killed in Maguindanao shootout
Ate Vi’s message to those against ABS-CBN’s franchise renewal
NBI files raps vs top execs of 2 tech firms
OVP spokesman tells Mocha Uson: Don’t drag us into your nonsense
Don't miss out on the latest news and information.