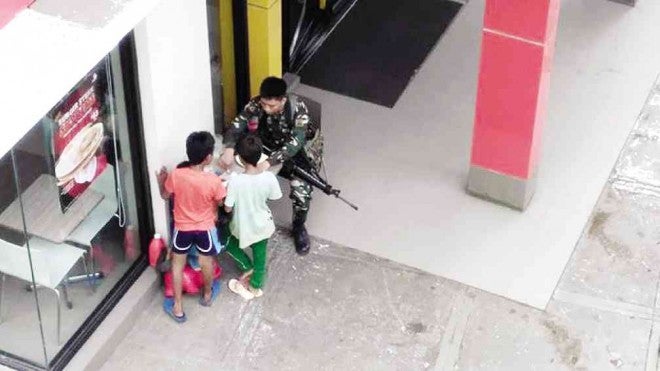 ZAMBOANGA CITY—When a reporter of radio station dxNO decided to get some fresh air at the rooftop of the station’s building in Isabela City in Basilan on Nov. 3, an unusual sight caught his eyes.

Karlo Marlon Ignacio immediately took a photo of a soldier sharing his meal with three hungry street children at a branch of a popular fast-food chain there and posted it on Facebook.

“I just want to share something inspiring that day. I was touched by the soldier’s deed. We hardly see similar images these days,” Ignacio told Inquirer.

The soldier turned out to be 26-year-old Cpl. Ryan Santos of the 8th Field Artillery Battalion station in Barangay Busay in Isabela City.

It was Col. Rolando Bautista, commander of the Joint Task Group Basilan, who helped identify Santos through the photo that Ignacio shared.

“He was temporarily detailed at Jollibee that time for preemptive measure as the said food chain received threats,” Bautista said. 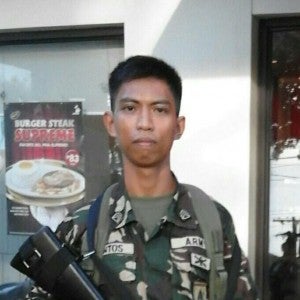 Reached by Inquirer, Santos said he was surprised at the attention he is receiving.

He said he had no inkling that what he did would spread in social media.

Santos recalled that the fast-food management handed him his meal on Nov. 3 and he took notice of the three children.

“When I opened the pack, the three children approached me. It’s so difficult for me to eat the meal while these children stared at me. They never begged or asked, they just stared at my food,” the soldier said.

Santos said he summoned the children and divided the food into four.

“I told them we will have equal share so everyone can eat,” he said.

A native of Cabanatuan City in Nueva Ecija, Santos grew up in a poor family.

He and two siblings survived on the pension of his father, a retired soldier. His mother was jobless.

“I know the feeling of being poor and hungry,” he said.

Santos said his parents had taught them to share whatever they have with others.

“Back at home, even if we have little food on the table, my parents divided it equally, we eat it together,” he said.