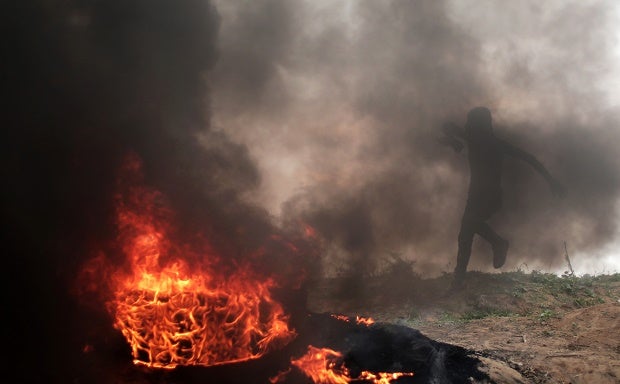 A Palestinian protester runs for cover during clashes with Israeli soldiers on the Israeli border with Gaza in Bureij, central Gaza Strip, Friday, Nov. 6, 2015. AP

HEBRON, West Bank — Back-to-back Palestinian shootings Friday wounded three Israelis, two of them seriously, the military said. The attacks signaled an escalation after a series of Palestinian stabbings and widespread stone-throwing that marked the current round of confrontations with Israel.

Israeli media said the wounded were teens between the ages of 16 and 19.

Earlier Friday, Israeli troops shot and killed a 73-year-old Palestinian woman in what the military said was an attempt to attack them with her car. Her son denied she tried to harm anyone, and that she was on her way to lunch with her sister when she was killed.

All three incidents took place in Hebron, the West Bank’s largest city, which has been the main area of friction in recent weeks. Hundreds of combat troops guard about 850 Jewish settlers in the center of Hebron where they live amid tens of thousands of Palestinians.

On Friday afternoon, shots were fired at Jewish worshippers leaving a major shrine in the Israeli-controlled downtown area, wounding two people, one of them seriously, the Israeli military said. Searches for the assailants were underway.

Media reports said a 16-year-old was seriously wounded and an 18-year-old was lightly hurt. They said the shots were fired from a distance.

The shrine is revered by Muslims and Jews as the burial site of biblical patriarchs and matriarchs. Thousands of Jewish worshippers visited Hebron on Friday for prayers linked to Sarah, the biblical matriarch believed to be buried at the site.

There was no immediate claim of responsibility for the shooting. Guns and assault rifles are available and accessible in the West Bank, including on the black market and in the possession of Palestinian militant groups. Hebron is a stronghold of the Islamic militant Hamas.

Later Friday, an Israeli was shot and seriously wounded by shots to the head fired from a passing car on the outskirts of Hebron, the military said. Israeli media said the victim was 19 years old and critically injured.

Earlier Friday, 73-year-old Tharwat Sharawi was killed by army fire at a gas station in Hebron, her family and the Palestinian Health Ministry said.

The military said the woman’s car slowed down and then sped toward the soldiers. It said troops jumped out of the way unharmed and opened fire. Footage on Israeli TV showed bullet holes in the car’s front and back windshields.

Sharawi’s son Ayoub, 52, denied his mother, who started driving in her 50s, intended to harm anyone. Sharawi, a mother of seven, was widowed in 1988 when her husband died from what Ayoub Sharawi said was tear gas fired by Israeli troops near a mosque.

“If she had wanted to take revenge (for her husband’s death), she could have done that a long time ago,” Sharawi said. “There is no way she wanted to run over soldiers.”

Elsewhere in the West Bank, an Israeli man standing outside an Israeli-run supermarket was seriously wounded in a Palestinian stabbing attack, and troops were searching for the assailant, the army said.

On the Gaza-Israel border, a Palestinian was killed by Israeli fire in a confrontation between stone-throwers and Israeli troops, Gaza health officials said.

The bloodshed was triggered by unrest at a major Jerusalem shrine revered by both Muslims and Jews, and quickly spread to Israel, the West Bank and the Gaza border.

Israel has accused Palestinian political and religious leaders of inciting the violence. Palestinians say the violence is due to a lack of hope for gaining independence after years of failed peace efforts.

In the past two months, there have been near-daily Palestinian attacks on Israeli civilians and soldiers. Most were stabbings, but in several cases, Palestinians used cars as weapons by ramming them into people.

At the same time, rights groups have alleged that Israeli troops have used excessive force against Palestinians, in some cases shooting dead suspected assailants who the rights groups said could have been arrested.