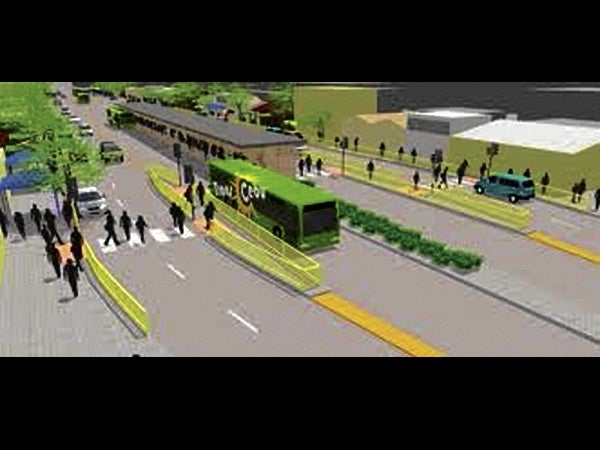 A model of the Cebu City bus rapid transit is pictured in this 2012 photo. PHOTO FROM CEBUCITYBRT.INFO

There may be hope for the vehicular traffic situation in Metro Manila, which has been ranked the worst on Earth by users of a road navigation application.

Amid growing public clamor to improve the deteriorating railway systems in the country, transportation experts said investing on a bus rapid transit (BRT) system and mobilizing people instead of vehicles may help in easing road congestion in the bustling metropolis.

Robert Siy, senior adviser of the Department of Transportation and Communications, admitted that traffic congestion “is taking our lives away from us.”

“I think we all recognize that. Unless we have quality public transport that is reliable, we will have worsening traffic situation in Metro Manila,” Siy said during the 24th national convention of the Philippine Institute of Environmental Planners in Makati City on Wednesday.

“Our vision is to have public transport as the number one choice of every person for their daily commute, even if they have the option of using a car or motorcycle,” he said, highlighting the increasing car volume on the road.

Stressing the importance of transforming road-based transport, Siy said “we have to go beyond rails” in coming up with solutions to traffic.

DOTC’s proposed BRT will feature a dedicated roadway for system buses in the middle lanes of major thoroughfares, while both right and left lanes would be for private vehicles. Siy said the design of stations, fair collection and IT systems, and buses themselves would allow fast boarding and alighting of passengers.

“Urban rail development is essential but it requires more time and funding. BRT can be implemented with less cost and in shorter time,” Siy said, adding BRT could be a “precursor” to rail or subway and could complement rail on the same corridor.

The government is eyeing to roll out the country’s first BRT system in Cebu, with a 23-kilometer corridor, 30 stations, and 176 bus units.

Citing an “inclusive mobility,” Nebrija said traffic infrastructure must be developed in such a way that it also gave priority to cyclists, those who wanted to walk, and even persons with disabilities.

To do this, she said policy gaps and local best practices should be identified, and institutional arrangements should be aligned. Yuji Vincent Gonzales/RC