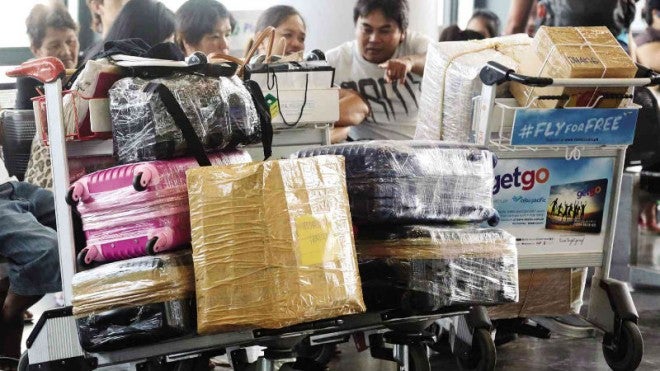 EXTRA PROTECTION Passengers waiting for their flights at Ninoy Aquino International Airport (Naia) Terminal 3 go to great lengths to protect their luggage by having these wrapped in plastic to prevent anyone from planting bullets (“tanim-bala”) in their baggage. The tanim-bala scam involves airport inspectors who allegedly place bullets in the luggage of passengers and then ask them for bribes to be spared from arrest. INQSnap this page for more photos. GRIG C. MONTEGRANDE

Workers holding lowly jobs at Ninoy Aquino International Airport (Naia) have been reaping the bitter fruits of the “tanim-bala” (bullet-planting) scheme that victims suspect was an extortion scheme of unscrupulous airport personnel.

Maintenance workers, porters and security guards at Naia reported being subjected to suspicious glances, cruel jokes and sharp words by an unforgiving public, with two death threats becoming the latest aggravation phoned in at the airport.

The first death threat was received by the Airport Police Department (APD) office at Naia Terminal 3 around 8 p.m. on Saturday, Oct. 31.

According to the APD, an unidentified male caller said, “I will plant bullets in the head of [Manila International Airport Authority or MIAA] officials. You have to fix the extortion [in your office]. One among you will fall. If I hear of another tanim-bala victim, one of you will fall. There will be no warning.”

The second threat came a little past noon on Wednesday, from a man who claimed to be an overseas worker in Saudi Arabia. It was received by the MIAA, and coincided with the press conference called by transportation and aviation security officials.

The caller expressed outrage over the tanim-bala scheme and said, “We will blow your heads off.”

Although the death threats were not directed at any particular person, David de Castro, spokesperson for MIAA General Manager Jose Angel Honrado, said they “will not be taken lightly especially in a place of public convergence such as the airport.”

“We are currently tracing the calls and investigating the threats received,” he added.

The phone calls were the latest backlash that airport workers have received amid public outrage and paranoia over the tanim-bala scam. Airport workers reported being the butt of jokes, insults and harsh words from suspicious passengers over the controversy.

One janitor assigned at the Terminal 1 arrival area restroom recalled being asked by a passenger to mind his luggage while he relieved himself last Tuesday.

“When he came back for his luggage, he looked at me from head to toe and asked, ‘You didn’t put any bullet in there, did you?’ I told him I wouldn’t do that and just walked away,” the janitor said.

Since then, he has declined any request for him to mind the luggage of passengers while they use the restroom. “I just tell them it might be better if they took their luggage with them.”

A cleaning woman previously awarded for her honesty, said she was saddened by how people have been treating them after the tanim-bala scheme surfaced. “They look at us with distrust and say hurtful things. [But] we are just doing our jobs. We are not doing anything wrong.”

She said she had noticed how passengers now squeeze in their luggage inside restroom cubicles when they use them. “I find it silly but I just allow them to do it, if it puts their mind at ease. But their side comments directed at us about tanim-bala are unnecessary and uncalled for,” she added.

The woman also recounted how one security guard helped a male passenger with his luggage although it was really not his job. “He just helped out because the man’s pile of luggage was spilling off his cart,” she said.

But instead of a thank you, the passenger looked at the security guard and remarked, “I hope you didn’t put anything on me,” the maintenance worker added.