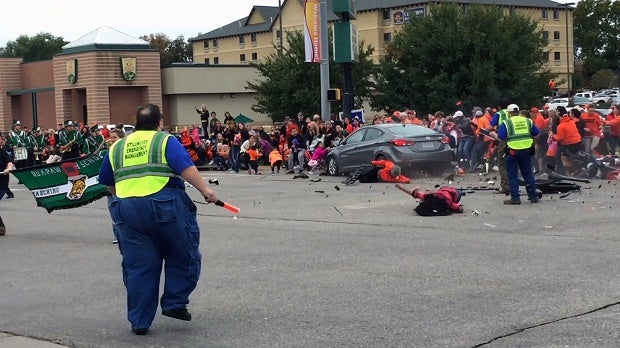 OKLAHOMA CITY — A woman accused of running a red light and purposely driving around a barricade and over a police motorcycle before crashing into spectators at a university parade was formally charged Wednesday with four counts of second-degree murder and 46 counts of felony assault.

Payne County District Attorney Laura Thomas filed formal charges against 25-year-old Adacia Chambers of Stillwater. Each murder count is punishable by at least 10 years and up to life in prison.

Chambers has remained jailed in Stillwater on $1 million bond since the Oct. 24 crash at an Oklahoma State University parade that left four people dead and at least 46 others hurt, including many children. A judge also has ordered a psychological evaluation for Chambers.

In Oklahoma, second-degree murder charges are warranted when someone acts in a way that’s “imminently dangerous to another person” but does so without premeditation.

The parade was part of Homecoming activities at the university. Homecoming is the tradition of welcoming back a school’s alumni and takes place at many US universities, colleges and high schools. It usually includes sports and cultural events and a parade.

Chambers’ attorney, Tony Coleman, said Wednesday that a psychological evaluation performed by a forensic psychologist he retained, Shawn Roberson, indicates his client suffers from bipolar disorder and is not competent to stand trial.

“She is severely mentally ill and in need of immediate psychiatric treatment,” Coleman said.

Police initially suspected Chambers was driving under the influence of drugs when she crashed into the parade crowd, but Stillwater Police Capt. Kyle Gibbs said Wednesday the results of a blood test have not been returned.

“The suspicion was DUI drugs from the get-go, and we’re awaiting the test results to see if those support that charge,” Gibbs said. “Any DUI arrest is initially based on probable cause, based on observations of the driver, their actions, things like that.”

Gibbs said Chambers stopped talking to investigators shortly after her arrest, and that it’s still not known what may have prompted her to drive into the crowd.

Thomas, the district attorney, said in a statement last week that evidence suggests the incident “was an intentional act, not an accident.” She declined to elaborate Wednesday on the charges.

Also on Wednesday, Thomas formally requested a competency evaluation for Chambers and asked a judge to impose a gag order to prevent all parties involved in the case from speaking publicly.

Stillwater police on Wednesday also released audio recordings of police calls and police radio traffic in the aftermath of the crash that depicted frantic callers asking for ambulances.

“We need everything we can get,” an officer tells a dispatcher just after the crash.

In a 35-minute video of Chambers’ booking recorded at the jail, she quietly answers a jailer’s questions but appears to show little emotion. Several portions of the video are pixelated, including when Chambers is searched and when an officer appears to administer an alcohol breath test.

While she was being booked, Chambers told jail staff that she had a history of suicidal attempts and treatment for mental health issues, and admitted feeling suicidal at the time of the crash, according to a probable cause affidavit signed by Stillwater police officer Kurt Merrill.

Coleman said that when he told Chambers about the deaths, “her face was blank.” He said that he was not sure Chambers was aware that she was in jail.

Coleman previously said that while speaking with Chambers in jail after the crash, he “was not satisfied at all that I was communicating with a competent individual.” He has said Chambers was at work before the crash and that she does not remember much, only that she felt confused as she was removed from the car.

The crash during the parade killed three adults and a 2-year-old boy, Nash Lucas. The adults were identified as Nikita Nakal, a 23-year-old MBA student from India at the University of Central Oklahoma in Edmond, and a married couple, Bonnie Jean Stone and Marvin Lyle Stone, both 65, of Stillwater.