Estrada won’t allow Lumads to camp out during APEC meet 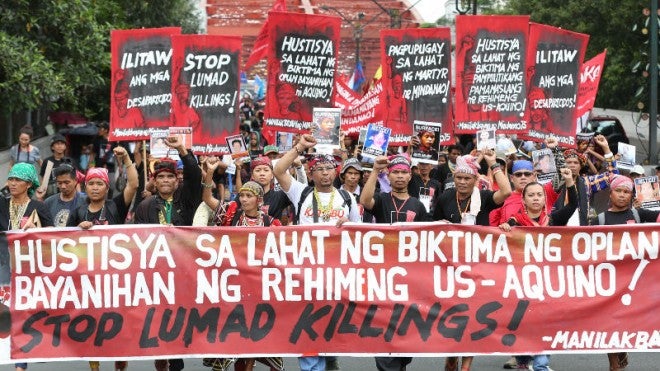 ‘LUMAD’ MARCH “Lumad,” indigenous peoples from Mindanao, march from the campus of the University of the Philippines in Diliman, Quezon City, to Liwasang Bonifacio in Manila to protest the killings and other human rights violations in their communities. The Commission on Human Rights says both the military and the New People’s Army were involved in extrajudicial killings of lumad. MARIANNE BERMUDEZ

MANILA, Philippines — Manila will not allow the Lumad to greet the upcoming Asia Pacific Economic Cooperation (APEC) with protest.

Mayor Joseph Estrada has given the indigenous people until November 12 to  camp out at Liwasang Bonifacio.

“They can’t go beyond that. I already allowed them to stay there but I hope they won’t abuse the permit given to them,” Estrada said.

Liwasang Bonifacio is close to the US Embassy, Manila City Hall, the Post Office, and Malacañang.

Instead, the Lumad will be transferred to Plaza Moriones in Tondo.

Leftist group Bayan- National Capital Region, whose members have been supporting the Lumad, said they would appeal Estrada’s decision.

In a text statement, Bayan-NCR said they were grateful to the local government for allowing the lumads to stay. But they’re still coming up with a statement regarding their pending transfer.

“The Manilakbayan ng Mindanao welcomes the gesture and concern of Manila City Mayor Estrada and Vice Mayor (Isko) Moreno. The Council of Leaders will release an official statement and decision on the transfer in a presscon at the Kampuhan in Liwasang Bonifacio on November 6. To date, the Council is currently consulting and talking on the matter,” Bayan-NCR said.  SFM