3 more held for bullets in bags 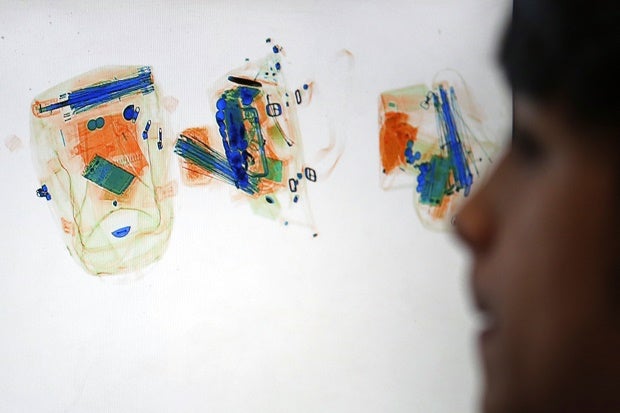 While transportation officials were busy attempting to convince the public that the  “tanim-bala” (bullet-planting) controversy had been blown out of proportion by media,  a Filipino-American passenger was arrested at Ninoy Aquino International Airport (Naia) Wednesday after a gun was found in his baggage.

Apart from 59-year-old Ramon Loarca, two other female passengers were stopped at Naia Terminals 1 and 2 for  alleged illegal possession of bullets.

According to the Aviation Security Group (Avsegroup) head, Chief Supt. Pablo Francisco Balagtas, Loarca was intercepted  around 9 a.m. at the final security screening checkpoint when the firearm was detected by the Office for Transportation Security (OTS) personnel in his bag when it went through the X-ray scanner.

The pistol, Balagtas said, was in Loarca’s carry-on bag and was inside a small black pouch.

He said that Loarca admitted that the gun was his and that he just  forgot to remove it from his bag. Balagtas told the Inquirer Loarca  was arrested when he could not show any document authorizing him to carry a firearm.

OTS Administrator Roland Recomono said that an investigation will be conducted as to how the pistol was not detected at the initial security screening checkpoint.

The two women, including an overseas Filipino worker (OFW), were stopped separately on Tuesday night and Wednesday morning for carrying ammunition in their baggage.

The bag of Qatar-bound OFW Melody Valdez, 40, allegedly contained a .45 cal. bullet when it went through the initial security screening checkpoint of Naia Terminal 1 at 8 p.m. on Tuesday.

Valdez initially denied having any ammunition in her bag, which was tightly wrapped in plastic.  It was close to 10 p.m. when her recruitment officer arrived and she agreed to open her luggage for inspection.  The bullet was found inside a pouch.

She denied the bullet was hers and claimed that somebody might have planted the ammunition when she used the restroom and momentarily left her baggage.

Monalisa Valmonte Rico, a London-bound passenger, was stopped at 2 p.m. Wednesday when a rifle bullet was detected among her belongings at the final security screening checkpoint at Naia Terminal 2.

The three passengers are in the custody of the Avsegroup National Capital Region headquarters and are set to be charged with violation of the Comprehensive Firearms and Ammunition Regulation Act in the Pasay City prosecutor’s office.