Ateneo player in police custody after game vs UP – source 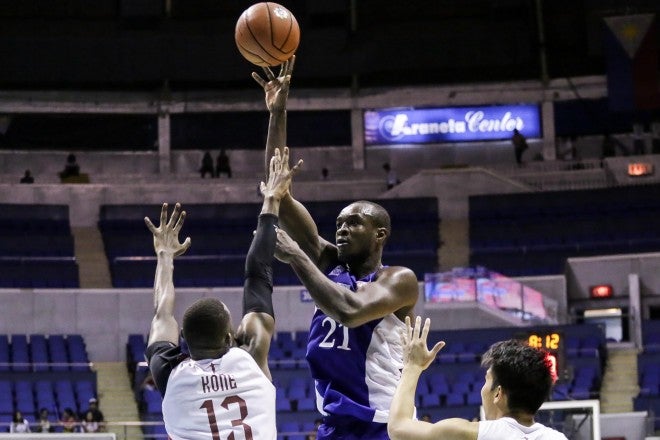 Ateneo center Chibueze Ikeh (21) attempts a hook shot against University of the Philippines during their game in the second round of the UAAP Season 78 men’s basketball tournament Wednesday at Smart Araneta Coliseum. Tristan Tamayo/INQUIRER.net

ANOTHER Ateneo Blue Eagles player is in trouble after Quezon City policemen took him into custody on Wednesday night allegedly over a complaint for  violence against women and children.

A police source confirmed to INQUIRER.net that import player Chibueze Ikeh was whisked away on an unmarked van and brought to the QC Police District headquarters.

A police report sent by the source said Ikeh was brought to the police headquarters to face a complaint for violation of  “Republic Act 9262 (Anti-Violence Against Women and Their Children Act of 2004), [filed at] RTC (Regional Trial Court) BR. (Branch) 102 Quezon City.”

The police source, however, has not confirmed yet whether an arrest warrant has been issued for and served on Ikeh.

Meanwhile, Ateneo Athletics Director Emmanuel Fernandez was mum on Ikeh’s encounter with the police, saying a “private matter” involving one of their players caused the commotion.

He did not say who that player was.

After the Ateneo Blue Eagles defeated the University of the Philippines  Fighting Maroons and secured a spot in the UAAP Final Four Wednesday, QC policemen waited for almost two hours for Ikeh.

There were four uniformed policemen at the back of Smart Araneta Coliseum while Ateneo head coach Bo Perasol talked with several persons during the near two-hour wait.

He added Ikeh would play in Ateneo’s next game which would be against La Salle.