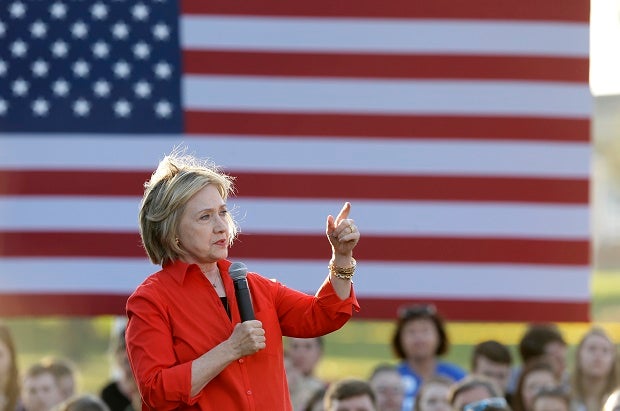 “We’re going to make this a voting issue just like the other side does,” Clinton said at a town hall event in early-voting Iowa.

Clinton said that while cutting down gun violence has become a tough political battle, she’s determined to push measures that would expand background checks, make it harder for guns to land in the wrong hands and overturn a law shielding gun manufacturers in lawsuits.

READ: In race for White House, guns no longer a taboo

Clinton’s appeal comes amid an uptick in public support for tighter gun laws, and during the first presidential campaign since a series of gun massacres and the December 2012 shooting in a Newtown, Connecticut, elementary school that killed 20 children and six educators. The issue remains popular among Democrats, who unsuccessfully pushed for gun legislation in Congress following the Newtown shootings.

But Democrats have avoided taking on the NRA, the influential gun owners’s lobbying group, in recent presidential elections. When Clinton’s husband, President Bill Clinton, left the White House after the 2000 election, he suggested that one of the reasons Vice President Al Gore lost was because of opposition in rural states to Gore’s approach on gun control.

Though it sounded Tuesday like she was taking political aim at Republicans, Clinton’s strategy also is designed to shore up support in her own party by driving a wedge between liberal Democrats and her chief primary rival, Vermont Sen. Bernie Sanders.

The former secretary of state and Sanders have tangled over gun violence since last month’s first Democratic debate. Representing rural Vermont, Sanders voted for a 2005 measure to give gun manufacturers immunity from lawsuits. Clinton opposed that bill in the Senate and said in the first Democratic presidential debate that Sanders wasn’t tough enough on guns.

At a Tuesday evening town hall at Grinnell College, Clinton didn’t mention Sanders but said the 2005 law was “absolutely outrageous. I voted against that. Why on earth would you gift that to anybody?”

Sanders said in an interview Tuesday with MSNBC that he supported expanding instant background checks and pointed to his votes in the past to ban assault weapons. But he suggested he’d be more capable of bringing various factions together to make improvements to the nation’s gun laws.

“The difference perhaps that I have with the secretary on that is that I believe we need a consensus,” Sanders said.

Former Maryland Gov. Martin O’Malley, who has struggled to gain traction in a field dominated by Clinton and Sanders, has also pushed for more stringent gun control.

Clinton is airing new ads in Iowa and New Hampshire trumpeting her stance on guns and met Monday in Chicago with a group of black mothers whose children were victims of gun violence, including the mothers of Tamir Rice and Michael Brown, who were both killed by police, and Trayvon Martin, the 17-year-old whose 2012 shooting by a neighborhood watch volunteer prompted protests around the country.

Republicans say the issue represents another shift by Clinton, who pointed to hunting as a way of life and a cultural touchstone during her 2008 primary race against Obama.

“Hillary Clinton’s hypocrisy on guns reinforces that she will do or say anything to get elected and that she is well outside the mainstream on the Second Amendment,” said Michael Short, a Republican National Committee spokesman. The Second Amendment of the U.S. Constitution guarantees the right to bear arms.