A FAILED attempt to seize their househelp and alleged threats to have them arrested marred the first appearance of expelled Iglesia Ni Cristo (INC) minister Lowell Menorca II and his family in the Court of Appeals, which Tuesday held a hearing on a plea for their protection.

Trixie Cruz Angeles, the Menorca family’s chief lawyer, asserted in open court that her clients deserve continued court protection after an alleged assault on helper Abbegail Yanson while on the premises of the Court of Appeals Tuesday morning.

Yanson herself cast aside all doubts to the story and spoke out in court on questioning by Magdangal de Leon, chair of the Court of Appeal’s Seventh Division.

“[The woman] put her arm around me and tried to pull me away,” said a tearful Yanson.

When the associate justice asked if the woman was her mother, Yanson replied: “No.”

Angeles made the assertion as lawyers of respondents from INC—executive minister Eduardo Manalo and governing council members Radel Cortez, Bienvenido Santiago and Rolando Esguerra—claimed that the case should be dismissed as the Menorcas were free, hence the protection issue was already moot and academic.

Menorca, his wife Jinky, 1-year-old Yurie Keiko Otsuka and Yanson were present in court, the first hearing the appellate court held on their amparo plea.

Menorca was abducted by armed men in July in Bulan, Sorsogon province, detained in a jail in Dasmariñas City, Cavite, province, and kept against his will at the INC headquarters in Quezon City until two weeks ago.

He said members of the INC advisory council abducted him because he was suspected to be Antonio Ebangelista, the blogger who exposed alleged corruption and other anomalies in the religious sect, as well as the abduction of other ministers.

The appellate court held the proceedings on orders of the Supreme Court, which on

Oct. 23 directed the INC leaders to produce the family in court just hours after they were “rescued” from alleged detention at the INC Central Compound in Diliman, Quezon City.

The respondents were absent but meant no disrespect to the court, according to their lawyer.

In a manifestation before the appellate court’s Seventh Division, Angeles said a woman, an alleged officer of the Philippine National Police-Criminal Investigation and Detection Group (PNP-CIDG), tried to forcibly take Yanson as they walked together toward the courtroom inside the court.

“We continue to argue (the petition for the issuance of the writ) on amparo (protection) because there is a continuing threat. Ms Yanson was forcibly being taken by a woman, also an INC member. She put her arm around her. It happened right in front of us,” Angeles said during the proceedings Tuesday.

But Prodigalidad said the woman was Yanson’s mother, “in tears” and “only wanted to hug her daughter as she hasn’t seen her for several months.”

Yanson’s parents came out in the media on Friday claiming their daughter was being held against her will by the Menorcas—a reversal of allegations that the latter had leveled against INC leaders.

“That claim is outrageous and a blatant lie,” Prodigalidad said in court Tuesday afternoon, the second part of the proceedings.

“We are saying that they (Menorcas) are no longer entitled to the protection of the writ (amparo). There is no continuing threat. The Menorcas are surrounded by security,” she said.

Prodigalidad noted that INC members were no longer speaking to those expelled from the church, as doing so would be risking their own expulsion. 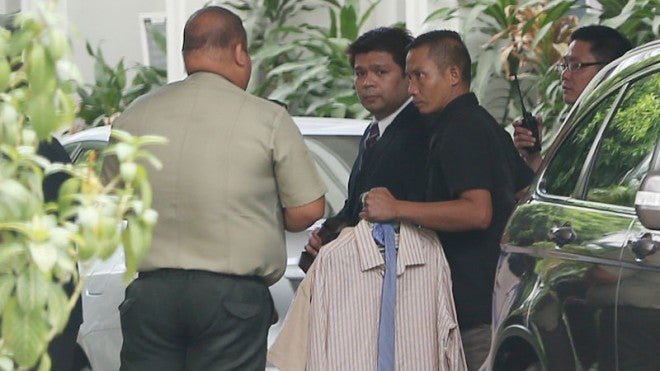 TIGHT GUARDING Former Iglesia ni Cristo (INC) minister Lowell Menorca II (center, in coat and tie) is escorted by security officers at the Court of Appeals after a hearing on his kidnapping case. Menorca has accused the INC of kidnapping and torturing him over suspicions that he was the blogger Antonio Ebangelista known for criticizing the homegrown religious sect. EDWIN BACASMAS

The lawyer for INC scored how the petitioners “exploit” the media, saying the Menorca side spilled “piece-meal” revelations in arranged press conferences.

“They exploit the media to the disadvantage of the respondents who abide by the rule of sub judice. The distrust, suspicion and fear on the respondents is completely undeserved,” she told the court, drawing subdued expressions of agreement from the rows of mostly white-clad INC members who attended the proceedings.

She said the Menorca camp’s constant contact with the media “is not conduct expected of someone who is afraid.”

Angeles also cried harassment amid rumors of Menorca’s supposed impending arrest by the National Bureau of Investigation Tuesday, saying her client has not been apprised of any criminal case lodged against him.

“As far as we’re concerned, we haven’t received a single [arrest warrant against Lowell Menorca], and even assuming that there was, we could move for quashal of the arrest warrant because no preliminary investigation was conducted,” Angeles said in an interview.

“We only have one interpretation of these events: That this is harassment and we need the writ of amparo to be made permanent… It just shows how big and powerful the institution we’re up against is,” said Angeles during a break in the proceedings.

The hearing began at 11:16 a.m., with a three-hour break over lunch to allow the Menorca camp to reproduce affidavits and have them notarized.

The Menorcas appeared in the first part of the proceedings in the morning but were absent when the proceedings resumed past 2 p.m. They stayed in a holding room in the appellate court compound and opted not to return to court as they were “really shaken” by the incidents earlier in the day, Angeles said.

In a bid to make the writ of amparo permanent, the Menorca camp wanted the court to take witness testimonies in lieu of just submitting affidavits, including putting Menorca himself on the witness stand for direct examination.

But, on Prodigalidad’s repeated manifestation that doing so would only lengthen what should be summary proceedings, the court required both sides to instead file affidavits of all their witnesses by Thursday.

“The purpose of amparo proceedings is not to determine the liability of the respondents but to determine if petitioners deserve protection,” Prodigalidad argued.

Witnesses will only be put to the stand strictly for cross examination purposes, De Leon said. The parties agreed to hold the next hearing on Nov. 11.