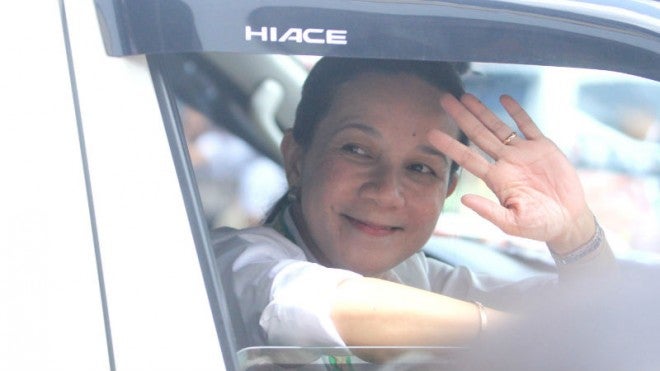 SEN. GRACE Poe on Tuesday said she has no plans of withdrawing from the presidential race and said those behind an e-mail claiming that she had withdrawn her candidacy may be threatened by her.

An e-mail received by several reporters contained a message from Poe saying that she had decided not to run for president, and that it was a difficult decision she had to do for the sake of her family.

The e-mail took note of the disqualification cases against Poe, and also quoted her as saying that while her decision was painful for her she was doing it for the sake of the country.

“There is no truth to that,” Poe told reporters. “In truth, we continue to work to bring our message about what we can do to help the people.”

She said those behind the move are sowing confusion.

“To our countrymen, maybe that is what happens when you become a threat to them. Maybe they’re thinking of ways to derail what you plan to do,” Poe said.

She declined to speculate on who are behind the e-mail, adding she does not intend to have it investigated.

There are more pressing problems in the country that have to be addressed, she said.

Poe said she would continue with her plans and face what she has to face.

“As of now, our battle continues. We face what we have to face, the cases where we think we have a strong defense. We don’t back down from these because this fight is not just for myself but for our plans to improve our country,” she said.

Poe’s spokesperson, Valenzuela Rep. Rex Gatchalian, called on the public to be vigilant against “baseless election-related black propaganda,” such as the bogus e-mail message.

“Left-handed approaches like this have no place in our electoral system,” Gatchalian said.

He also said Poe’s opponents were getting “desperate,” hence their latest move which he described as a “cheap, cowardly” act.

According to the latest surveys, Poe, who is running as an independent, is the frontrunner in the presidential race.