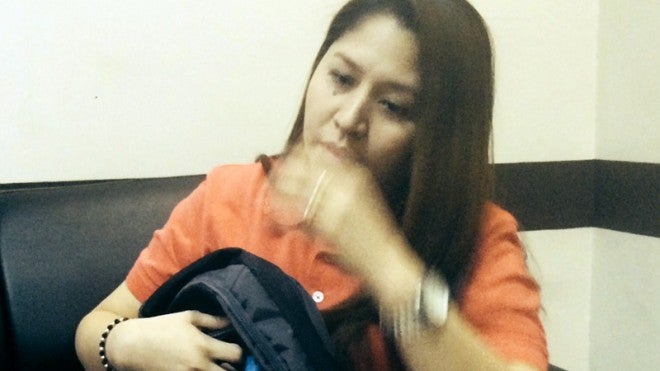 TARGET Maria Paz Triaz claims that she was stopped at Naia Terminal 3 on Oct. 27 after a bullet was found in her backpack on her departure with hermother, uncle and cancer-stricken grandmother, who had a checkup at a hospital in Singapore. Triaz was allowed to leave after she signed a document stating that the bullet was just an amulet. NANCY C. CARVAJAL

MARIA Paz Triaz needed no prodding from anyone to reveal to authorities her traumatic experience as a victim of a “tanim-bala” (bullet-planting) scam at the airport last week on her way to Singapore to accompany her cancer-stricken grandmother for a medical checkup.

The 34-year-old housewife Tuesday went to the National Bureau of Investigation to recount how a bullet was purportedly planted in her backpack on Oct. 27 and how authorities told her, when she vehemently denied owning it, to sign a document saying that she carried it as an amulet and would be able to board her flight.

Triaz said she told the personnel conducting the screening at Ninoy Aquino International Airport (Naia) Terminal 3 she was willing to be detained and face investigators and contest the mysterious presence of the bullet in her backpack. Told that she would not be prosecuted and could continue with her journey, she signed the document.

Triaz, her grandmother, mother and uncle then proceeded to Singapore and returned four days later.

The incident involving the Triaz family happened amid a national and international outrage over travelers claiming that bullets had been planted in their luggage at the country’s airports as part of an extortion scheme.

The smart-looking housewife, in expensive clothes and wearing jewelry, said going to the NBI was an “enlightened decision.”

“I have to come forward despite the fact that I was not detained after I signed a document that it was an amulet,” Triaz said in an interview at the NBI headquarters.

“My mother convinced me that to allow and ignore what happened to me and my family at Terminal 3 of Naia in the morning of Oct. 27 was like tolerating the illegal activities of these airport personnel,” said Triaz, who added she and her grandmother were accompanied by an uncle and her mother in the Singapore trip.

“Until now my cancer-stricken grandmother could not be comforted due to the traumatic experience of the thought that I could go to jail,” Triaz said.

Triaz said her family’s ordeal started on their way to the second X-ray scanner when they were told to weigh their carry-on bags to comply with the limit of 7 kilos between 11 a.m. and noon on Oct. 27.

She explained that all their bags passed through the first X-ray scanner and were cleared.

“After the airline check-in and on our way to the second X-ray scanner, an airport personnel in light blue told us to weigh our hand-carried bags and spread its contents around the bags to comply with the limit,” Triaz narrated.

She added that while she was doing the weighing and transferring some of the items from her companions, she dropped her backpack on the floor and proceeded to the second X-ray scanner being manned by three women in light blue uniform. She said she could not see the IDs of the women because they were constantly playing with them.

“While waiting for bags to come out from the X-ray conveyor, I overheard one of the women shouting for the owner of a black backpack. I know that nothing prohibited was in my backpack, but it turned out she was referring to my bag,” Triaz said.

“She instructed me to pick up my bag and told me to put it again in the conveyor for another round of X-ray scan because she claimed she saw something prohibited. After that the officer told me to unlock my backpack and take out all the contents,” she said.

“Because of news reports of the tanim-bala scam I made sure that all the zippers were locked except for a small outside pocket which I did not lock because I did not put anything there,” she said.

“After taking out all the contents and nothing illegal was found, the woman officer, also in light blue uniform, waved her hands telling us to see that she had nothing in her hands. She then inserted her hands in the outer pocket of my backpack and to my surprise she took out a small plastic like the one use by peanut vendors. She said that inside the plastic was a bullet.

“She showed it to me to confirm it was indeed a bullet but I was not allowed to examine it,” Triaz added.

“I was angry and scared at the same time, but I did not show panic, although I was scared because of news reports that despite being innocent a passenger found with a bullet in her bag could still be detained and tried for illegal possession. I immediately said that I had to call my lawyer and the NBI,” Triaz said.

“One of them told me that someone will talk to me. In my mind, I was suspicious of what they wanted. They acted like it was a normal occurrence for someone to have a bullet in their bags,” Triaz said.

“I was so worried, looking at how pale my sick grandmother was when she heard the declaration of the airport staff and my crying mother, but I stood my ground because I know I was innocent,” she said.

Triaz said a woman, also in a light blue uniform who looked older, came and told her, “Let’s fix this.”

“I did not want to pay, I immediately told the lady officer I am willing to be detained and go through the process of investigation because I could prove that I am innocent. When they sensed that I was not willing to leave, the older woman then said, ‘Let’s keep it among us.’ They asked me to sign a record book that the bullet was for my anting-anting (amulet) and allowed me and my family to board the plane without further harassment,” Triaz said.

An NBI special investigator said the agency would request airport records and video to verify the narration of Triaz.

“If it’s true that she had a bullet in the pocket of her bag, there should have been an investigation. Asking her to sign a piece of paper stating that it was for an amulet was highly irregular,” the investigator said.

Sen. Alan Peter Cayetano on Tuesday filed a complaint in the Office of the Ombudsman calling for the suspension or dismissal of Transportation Secretary Joseph Emilio Abaya for neglect of duty and command responsibility. Also named in the complaint were MIAA General Manager Jose Angel Honrado, Office for Transportation Security Administrator Roland Recomono and the Philippine National Police-Aviation Security Group head, Pablo Balagtas.

“They are not only in denial, but it’s like there is no problem. There is no one in charge,” Cayetano said. “The government does not want to accept that there is a problem.”

“Let’s leave it to the Ombudsman,” Balagtas said when asked for comment.

Malacañang has downplayed the alleged existence of an extortion syndicate at the country’s airports and shrugged off calls for heads to roll at the Manila International Airport Authority (MIAA) and agencies tasked to secure airline travelers. It said many travelers caught with bullets in their bags had said these were (used as) amulets.

“The President has given instructions, and hopefully within this week, DOTC will share with the public the measures that will be taken,” Lacierda said. “I don’t share that cultural thing of bringing amulets, but I understand a number of people consider bullets as amulets. So, that’s being looked into.”

The DOTC said it had introduced changes in baggage handling at Naia and that more closed circuit television (CCTV) cameras were being installed.

“We continue our investigation and info gathering to ensure any operation of tanim-bala, if ever there is any, is addressed and halted, said Abaya, whose department has been accused of corruption and inefficiency. With reports from Jaymee T. Gamil, Dona Z. Pazzibugan, Tina G. Santos, Jeannette I. Andrade and Miguel R. Camus