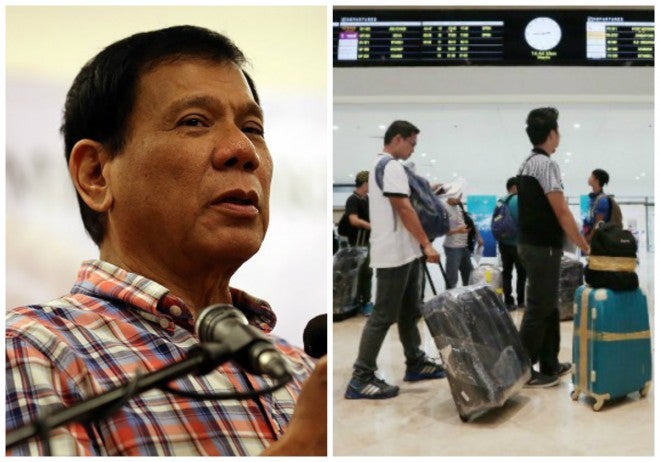 DAVAO CITY, Philippines — Mayor Rodrigo Duterte asked President Aquino to take drastic action to stop the reported tanim-bala (bullet-planting) operations in the country’s airports as he demanded that the general manager of the Ninoy Aquino International Airport and all personnel involved in ground operations be fired.

“The President should order the relief of all officials connected to the CAAP, the aviation command, including the porter services and the drivers,” Duterte said, as he also offered his legal services to victims for free.

He said the President should do it in the next five days, following the suspension of the flights in the country’s airports.

He said he was worried that the scheme, which recently victimized missionaries and even an engineer coming over for a conference in Davao City, might victimize more passengers going straight to Hong Kong or Singapore, and would land them straight in jail. He said the bullets planted in the baggage in domestic airports might be carried straight through the connecting flights and might land people in jail in countries with much harsher laws than in the Philippines.

“What would be more tragic is if the one who will be victimized comes from the provinces, doing connecting flights to Hong Kong, Singapore, America,” Duterte said, “In this case, innocent Filipinos will directly land in other country’s prisons,” he said. “This is not just a matter of extortion, this will threaten the lives and freedom of ordinary Filipinos,” said Duterte, who added that he had repeatedly called the attention of the government about this scheme in the previous months.

He said it was not possible for the tanim-bala scheme to happen in the airports without the conspiracy of the police and the people handling the passenger baggage.

“There has to be a conspiracy between the porters and the police because the one who will apprehend the victims will be the police,” Duterte said. He said the government should do an inventory of all the people victimized by this scheme in the previous months by looking into the records of the police or the Aviation Security Command. “If they have tampered with the records, that’s another case against them,” Duterte warned.

“I cannot express my anger, I can only commiserate with the innocent victims,” Duterte said, “It’s not just extortion by the police and CAAP; that transshipment, if you’re going to America, derecho na man na (more trouble).”

He also asked why CAAP had not done anything about it. “They should be relieved immediately, if (they have no manpower), let the army do it; if not, the police from the provinces should do it,” Duterte said.

He said he had told the President before that he had sworn his loyalty to him up to the end of his term but he should do something to stop this scam.

“Otherwise, Mr. President, I will lose trust in you,” he said, “As a mayor, I did not ask anything from you, but I’m asking you now as a supporter, do something drastic about it.”

At the House of Representatives, Bayan Muna Representatives Neri Colmenares and Carlos Isagani Zarate filed a resolution asking the Committee on Transportation to investigate – in aid of legislation – the so-called tanim bala scheme at NAIA and other Philippine airports.

Colmenares and Zarate agreed that the scheme “has brought suffering and damage to our air passengers, including OFWs.”

The militant lawmakers said the investigation would also unmask the perpetrators so they could be held liable. (With a report from Allan Nawal, Inquirer Mindanao).  SFM