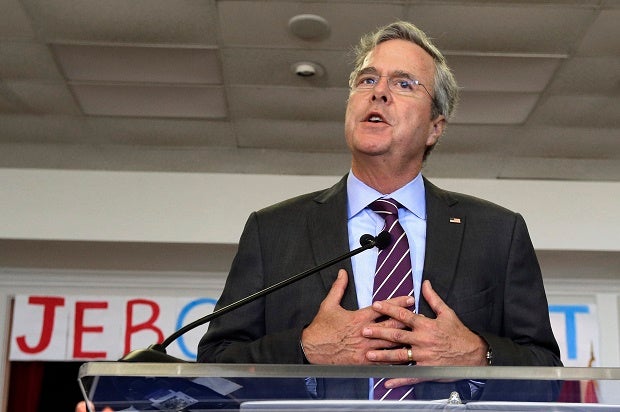 Republican presidential candidate, former Florida Gov. Jeb Bush in Tampa, Florida. One year before Election Day 2016, Republicans are consumed by uncertainty and infighting while Democrats are coalescing behind Hillary Rodham Clinton. But there’s a long way to go. AP

WASHINGTON — After a devastating loss in the 2012 presidential election, the Republican Party entered a period of intense self-reflection and emerged with a firm promise to learn from its mistakes.

The party vowed to avoid a prolonged and vicious 2016 primary. It concluded it must embrace an overhaul of the nation’s immigration laws and adopt a more welcoming tone to win over women and minorities.

Yet a year from Election Day 2016, the Republican primary is a rough and bumpy competition. More than a dozen candidates are fighting for the support of voters — and skirmishing among themselves over the process of picking the nominee. And there are few signs the candidates are committed to expanding the party’s appeal beyond its conservative base.

Meanwhile, there’s no such drama among Democrats. The party appears to be coalescing behind front-runner Hillary Rodham Clinton, who is building a campaign operation aimed at turning out the general election voters who catapulted Barack Obama to the White House.

The challenges facing Republicans were on display Monday, as bickering continued among campaigns about upcoming presidential debates. That’s an issue the Republican National Committee thought it had resolved, having spent years retooling its primary process after officials said it left 2012 nominee Mitt Romney bloodied heading into the general election.

Members of both parties say Republican White House hopefuls have also ignored the recommendation from the RNC’s self-study that insisted Republicans must improve the party’s appeal among women and minorities.

“Devastatingly, we have lost the ability to be persuasive with, or welcoming to, those who do not agree with us on every issue,” the report found. In addition to an improved tone, the RNC outlined a single policy imperative: “We must embrace and champion comprehensive immigration reform. If we do not, our party’s appeal will continue to shrink to its core constituencies only.”

After a bipartisan group of senators failed to turn immigration legislation into law, Republicans on the campaign trail — including some of those involved with that effort — have moved sharply in the other direction. Almost the entire Republican field now calls first and foremost for increased security along the Mexican border.

Some, including front-runner Donald Trump, want to deport the estimated 11 million immigrants in the country illegally — a policy prescription experts suggest would be difficult if not impossible to achieve.

READ: The Trump swagger is seen, not always loved, worldwide

Incoming House Speaker Paul Ryan said over the weekend there would be no immigration bill until 2017, at the earliest. But Trump, who has infuriated Latinos by describing Mexican immigrants as rapists and criminals, keeps the topic front-and-center in the race.

“There have been moments that have been a little painful,” says Henry Barbour, an author of the RNC’s postelection report and a Republican National Committeeman from Mississippi. “We have to nominate a candidate who can win — someone who can grow our party instead of making it smaller.”

Absent a clear front-runner of their own, Republicans are trying to rally around their opposition to Clinton — amid signs that she’s getting stronger.

Commanding performances in the first primary debate and during 11 hours of testimony before a Republican-led congressional committee investigating the deadly September 2012 attack on a US diplomatic facility in Benghazi, Libya, reassured many Democrats who’d feared the controversy over Clinton’s use of a private email server as secretary of state could harm her campaign.

Her poll numbers have rebounded from a summer slump, and she now holds a wide lead nationally over her main rival, Vermont independent Sen. Bernie Sanders.

The relatively clear Democratic field has allowed her team to focus a full year before Election Day on building the kind of operation that can carry her beyond the primary contests. She currently employs 511 staffers across the country — close to the number of staff on all the Republican campaigns combined.

And fundraising reports show an energized Democratic Party, with Clinton and Sanders together raising only slightly less than 15 candidates on the Republican side combined. The two top Democrats had roughly the same amount in the bank at the beginning of October as all the Republicans.

Clinton aides say that they budgeted for a high level of spending early in the campaign, and that the team is making important investments in data analytics, digital infrastructure and organizing that will help in both the primaries and the general election.

Few, if any, Republican campaigns have made such investments, although the Republican National Committee has expanded its digital operation.

Still, with two Senate committees and the FBI investigating Clinton’s email arrangement, that issue could re-emerge. And an unpredictable Democratic primary electorate, which has moved to the left during President Obama’s administration, leaves Clinton and her team cautious about their prospects.