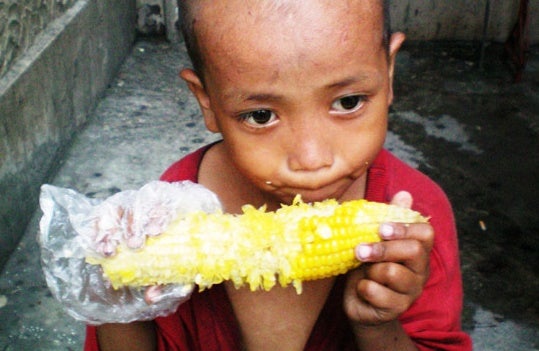 Hunger made a comeback to many Filipinos in the third quarter of 2015 as more people told a survey that they were without food during that period. DON LEJANO / INQUIRER.NET

SOME 3.5 million Filipino families experienced hunger in the last three months, about 700,000 families more than the previous quarter, as hunger rose in Mindanao and Luzon, according to the latest survey by the Social Weather Stations (SWS) survey.

The survey, conducted from Sept. 2 to 5 and first released by BusinessWorld, found 15.7 percent of respondents saying they experienced involuntary hunger at least once in the last quarter, up from the record low of 12.7 percent posted in June.

The latest figure is the highest since the record 17.2 percent registered in December 2014.

The increase in hunger incidence was most pronounced in Mindanao, where it went up to 21.7 percent in September (from 14.3 percent in June), the highest since the record 22.3 percent registered two years ago in the region.

Overall hunger also rose in the balance of Luzon, where it increased from 10.7 percent to 14.7 percent between June and September, or the third quarter of the year.

It was only in the Visayas that hunger went down, from 11.7 percent in June to 9.3 percent in September. The Visayas figure is the lowest since the record 5.6 percent posted in March 2004.

Hunger in Metro Manila was unchanged at 18.3 percent.

Presidential spokesperson Edwin Lacierda, however, brushed off the latest survey.

He said that at 15.7 percent, the Aquino administration had relatively improved the poverty situation based on the highest recorded hunger rate of 23.18 percent registered in March 2012.

“We continue to address the main problems of hunger and poverty. These are related and government has implemented the social intervention—poverty alleviation programs that we have done, CCT (conditional cash transfer) for one,” said Lacierda in a briefing.

“We continue to address the concerns and the causes of poverty and hunger, and we will do that until the end of our term,” Lacierda added.

The survey used face-to-face interviews with 1,200 respondents and had a margin of error of plus-or-minus 3 percentage points.

The survey also found that among those who said they were poor, overall hunger was at 20.9 percent, up from 18.1 percent in June.

Moderate hunger among those who rated themselves “poor” was at 18.5 percent in September, up from 15.6 percent in the last quarter, while severe hunger was at 2.5 percent among the self-rated poor, or similar to the 2.4 percent recorded in June.

Among those who rated themselves as “food poor,” on the other hand, total hunger was at 24.6 percent in September, up from 22.6 percent in June.

Earlier survey results released by SWS showed about 11 million Filipino families rating themselves as “poor” in the third quarter, while an estimated 7.8 million households considered themselves “food-poor.” The survey was also conducted in the same period. Inquirer Research, with a report from Gil Cabacungan

Is hunger getting over the hump?