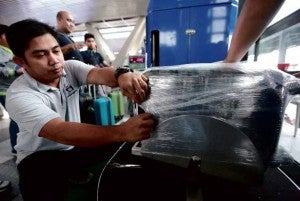 Travelers have their luggage wrapped in plastic for P160 a piece as security against the
“tanim bala” racket at Ninoy Aquino International Airport. GRIG C. MONTEGRANDE

MANILA, Philippines — While officials of the country’s premier airport are feeling the heat, workers at the Ninoy Aquino International Airport (NAIA) are getting burned by the “tanim-bala (bullet-planting)” debacle.

Porters are pushing empty carts, driven away by hostile passengers who apparently see them as bullet-carrying fiends looking for victims.

There are around 200 porters working in the four NAIA terminals.

Porferio Lavado Jr., 42, who has been a porter for 17 years, lamented what has happened to airport workers since “tanim-bala” allegations surfaced.

“We are really affected. The passengers must understand that this is our livelihood and we will not do anything to lose their trust,” Lavado told the Philippine Daily Inquirer in Filipino.

“We rely on them (passengers) to survive,” he pointed out, adding that their only job has been to help carry the luggage.

Lavado was among a group of NAIA workers awarded in August for their honesty. The porter had returned in July a clutchbag containing some P120,000 worth of assorted foreign currency.

He added, “We have everything to lose and nothing to gain if we went around planting bullets like they accuse us of,” stressing that unscrupulous persons in their ranks were immediately removed.

On Monday at around noon, the Inquirer witnessed an argument between a 52-year-old porter and a female passenger who had just arrived at the NAIA terminal 1.

Just as the porter approached with a cart to offer his help with her luggage, she snapped, “Get away from me. I don’t want you to plant any bullet on me.”

The porter, who had been receiving shabby treatment since Sunday night from passengers, lost his temper and answered back, “We only carry carts. We don’t have guns. We do not do that. Don’t look down on us.”

He walked away even while the irate passenger apparently hasn’t finished her tirade.

“I’ve been getting that since last night. Some of them treat us like that, like we have some disease. The others joke about it but it still hurts us. We are not criminals,” he explained, still seething from his encounter with the hostile passenger.

A 60-year-old porter, who has been at the NAIA for 12 years, told the Inquirer that they probably received the most backlash for the “tanim bala” controversy.

“We somehow got implicated in all that. Even if we are told about the bullet thing as a joke, it hurts us a lot,” he said.

He said he used to assist an average of 20 passengers in 24 hours, but as of Monday, he was down to less than 10 persons since the issue went viral on social media.

“We are not doing anything wrong. This is our only means of livelihood,” he said, expressing the hope that public perception would not treat them so harshly.

To address the public’s concern on the alleged “tanim-bala” incidents, closed circuit TV (CCTV) cameras were installed on Monday at the departure security screening checkpoints of the NAIA terminal 3.

Airport authorities said that the CCTV cameras would also be set up at the departure screening checkpoints of the other terminals.

Likewise, NAIA officials are compiling reports from January to this month of all intercepted firearms, ammunition, explosives, and deadly weapons.

According to one official, the compilation will contain the details identifying the Department of Transportation and Communications-Office for Transportation Security (DOTC-OTS) personnel, x-ray operators and baggage inspectors who intercepted the deadly weapon and who filed the case.

It will likewise include the status of the cases in court or if the passengers were allowed to take his or her flight. The official explained that the compilation would help in getting at the root of the whole issue, verifying the existence of the extortion racket, and resolving it.

Based on records from the DOTC-OTS, there were 88 ammunition interceptions from airport passengers from January to October this year at the NAIA. Of the number, 48 were live bullets, which meant they contained the components of ammunition under the Comprehensive Firearms and Ammunition Regulation Act: slug, primer, shell, and powder. Also there were 21 empty shells; 4 dead ammunition; and 15 bullets used as amulets for good luck or protection against hexes.

Meanwhile, Manila International Airport Authority (MIAA) general manager Jose Angel Honrado refused to concede to the clamor by some lawmakers for him to resign.

“Why should I resign?” Honrado told the Inquirer, pointing out that the so-called “tanim bala” scheme was not the airport authority’s direct concern.

While he said he respected the opinion of some lawmakers, “The President who appointed me is not asking me to step down.  If he does, then I won’t stay a second longer in this post.”

“Besides, I never back down from a good fight,” Honrado told the Inquirer.

“The one who should be investigating the matter is the agency concerned,” he said, apparently referring to the DOTC-OTS.

“And they are the ones who should be resolving this issue,” Honrado said.  SFM