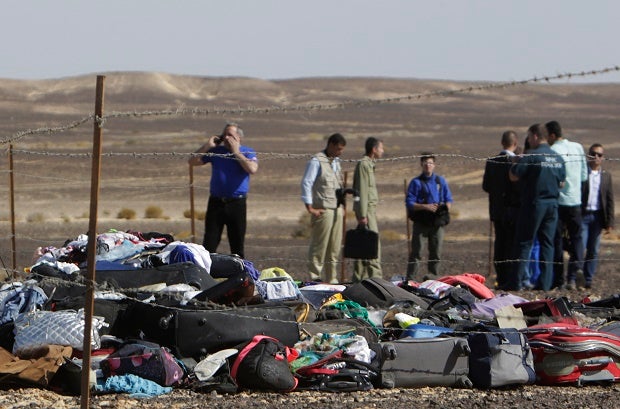 Russian investigators stand near debris, luggage and personal effects of passengers a day after a passenger jet bound for St. Petersburg in Russia crashed in Hassana, Egypt, on Sunday, Nov. 1, 2015. The Metrojet plane crashed 23 minutes after it took off from Egypt’s Red Sea resort of Sharm el-Sheikh on Saturday morning. The 224 people on board, all Russian except for four Ukrainians and one Belarusian, died. (AP Photo/Amr Nabil)

MOSCOW — The Russian passenger jet that crashed in Egypt could only have broken up midair because of “external” factors, the airline company said Monday.

“There are no technical failures that could lead to the plane breaking up in the air,” Alexander Smirnov, director of flights at Kogalymavia charter airline told a press conference in Moscow.

He added that “the only explanation — is some kind of external action”, without giving further details.

He said the plane began falling out of control and the pilots had no time to report the emergency situation.

“The crew totally lost control and for that reason there was not one attempt to get in contact and report on the accident situation onboard,” Smirnov said.

The plane was “flying out of control — that is it wasn’t flying, it was falling,” he said.

“Apparently by that moment the plane had received significant damage to its construction that did not allow it to continue the flight.”

While stressing the need to wait for the findings of an investigation, Smirnov said that he ruled out both a technical fault and human error.

“We rule out technical faultiness of the plane, we exclude a mistake by the pilot or the crew, the so-called human factor,” he said.

He said the plane was in “excellent technical condition” at the time of the accident.

The Moscow-based airline’s technical director also ruled out that damage to the plane while it was under previous ownership could have been a factor, saying that it had been regularly checked since.