Cagas’ supporters took turns in denouncing what they described as an apparent attempt to bloat the number of voters in Sta. Cruz, which, as of the 2013 data, had exceeded 50,000.

“They want to ensure that their candidates win,” Gerry Tan, a Cagas mouthpiece said over his Sunday radio program over Charm Radio, a station operated by the former executive’s family. 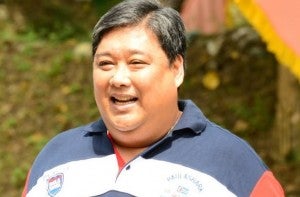 Tan named a politician identified with the administration of Gov. Claude Bautista as responsible when he charged that people from as far as Sta. Maria town in Davao Occidental were ferried in last week in time for the deadline of voters’ registration.

Cagas, of the Nacionalista Party, is running for governor anew against former ally, Arsenio Latasa of the Nationalist People’s Coalition – who previously served as Digos City mayor and Davao del Sur vice governor.

He said there was no unusual influx of registrants and that the persons who lined up outside their office, particularly on October 31, obviously wanted to beat the deadline.

Asked to comment on observations that even people from other areas registered in Sta. Cruz, Mujal said the Commission on Elections (Comelec) had no prohibition on this.

Mujal also said voters from other areas were not stopped from transferring their records to other places.

“If an applicant wishes to transfer from one voting place to another, he or she must fill up a form from the Comelec signifying his intention for transfer of registration,” Mujal said.

He also clarified that under the law, the six-months residency requirement would start on the last day of voter’s registration or application for transfer of voting record.

Mujal said by the application of Comelec law, those who have availed of registration during the past weeks were still not considered voters of Sta. Cruz.

He said they would undergo the process of determination through the inclusion/exclusion proceeding.

“Our centralized computer network will certainly find out if a certain applicant had already registered in other areas,” Mujal said.

“Everything will be in proper order prior to the May 2016 in so far as the voters’ registration is concerned. We have a lot of safety nets to weed out undesired voters from our legitimate list,” Mujal added.

He said while there were issues raised against the conduct of the voters’ registration in Sta. Cruz – specifically for the past week – no formal complaint has been lodged as of yet.

“Our legal department is more than willing to entertain legitimate complaints. The complainant must show proof that will become the basis of our actions,” he said.  SFM