Muslim gov not laughing at 2 ‘Arab’ hosts of show 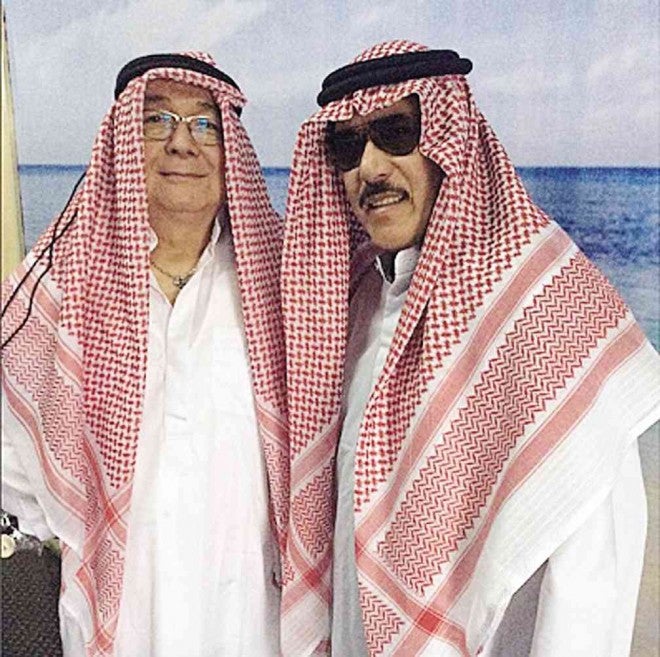 ‘INSENSITIVE’ Muslims in Mindanao are demanding an apology from Joey de Leon and Sen. Tito Sotto for dressing like Arabs on their show “Eat Bulaga.” EAT BULAGA INSTAGRAM

WHEN “Eat Bulaga’’ hosts Joey de Leon and Sen. Tito Sotto appeared in Arab garb on the noontime show’s Halloween segment on Saturday, a Filipino Muslim official demanded that they apologize for portraying Muslims as troublemakers.

Gov. Mujiv Hataman of the Autonomous Region in Muslim Mindanao (ARMM) said the ARMM government “takes offense at and is appalled by the stunt pulled on national TV by noontime show ‘Eat Bulaga’ on Saturday, Oct. 31—where hosts Joey de Leon and Sen. Tito Sotto came out dressed as Muslims for their Halloween special.”

Sotto has countered that the official has a misplaced sensitivity.

The controversy came as a result of a survey that showed 43 percent, or two out of every five Filipinos, believed that “there hasn’t been much real improvement in the position of Muslims in the country.”

More than half of Muslims (64 percent) were disappointed with their position in society, according to the nationwide survey conducted by Social Weather Stations (SWS) in June.

In a statement issued by the ARMM’s Bureau of Public Information, Hataman said the costumes of De Leon and Sotto were an affront to Muslims. “What ‘Eat Bulaga’ did in its Halloween special was a mockery of and an affront to the image of the Muslim, apparently in the name of entertainment,” he said.

De Leon and Sotto each wore a keffiyeh (headdress) and a thawb (ankle-length, long-sleeved garment), which are typical among Middle Eastern or Arab men, including non-Muslims. The thawb is also worn by Filipino Muslims on very special occasions, like Eid al-Fitr (end of the fasting month of Ramadan) and Eid al-Adha (Feast of Sacrifice) prayer.

“On behalf of the Filipino Moro people, we demand that producers and hosts of the noontime show issue a public apology,” Hataman said in a statement. “This display betrays an insensitivity by these hosts, as they equated the Muslim garb as a costume to be feared, in the way that zombies and ghouls are to be feared.”

Sotto said: “He (Hataman) is wrong! We were wearing an Arab costume. There are Arab Christians if I may remind him. I have been wearing that outfit for many years after a sheikh from Riyadh gave me one and asked me to wear it.”

“Others wear priests’, nuns’ and even the Pope’s outfits, and as long as you are not disrespecting what you wear, there is nothing wrong. I suggest the people complaining should find out more about the origin of Halloween so they will not have misplaced sensitivities,” he said.

The Halloween special showed the “Eat Bulaga” mainstays in different costumes. Only De Leon and Sotto wore similar costumes to depict themselves as Middle Eastern men.

Commissioner Mehol Sadain of the National Commission on Muslim Filipinos cited a message from the “Eat Bulaga” camp that the Muslim garment had been in their production costume room for such occasions as the UN Day.

Hataman noted the vexation suffered by Muslims in the country as a result of a police sketch describing a suspect in a bomb attack in Zamboanga City as a “Muslim type.”

“It was not too long ago that we raised our voices in indignation over the stereotypical presentation of the National Bureau of Investigation of a Zamboanga bombing suspect as being a Muslim-type,” he said.

In the SWS survey, 24 percent of the 1,200 respondents disagreed with the statement that there had not been much real improvement in the position of Muslims, while 30 percent were undecided, resulting in a moderate net agreement of +18.

The survey was noncommissioned. It had a margin of error of 3 points for national percentages, and 6 points each for Metro Manila, the rest of Luzon, the Visayas and Mindanao. Reports from Nash B. Maulana and Karlos Manlupig, Inquirer Mindanao; and Aries Joseph Hegina and Kristine Angeli Sabillo, Inquirer.net

Read Next
Mandaluyong cops told to answer raps by Japanese trader
EDITORS' PICK
Metro Manila to remain under COVID Alert Level 2 until December 15
Legarda: Ending Violence Against Women, a cause for all
A delightful blessing!
Duterte open to making jabs mandatory; Cabinet mulls ‘pressuring’ the unvaccinated
IATF tightens border control, suspends entry of fully vaxxed nationals from ‘green’ countries
Villar Group gears up for AllValue Shopping Party on Dec. 3; around P 1-million promos and discounts up for grabs
MOST READ
Quiboloy warns of ‘much worse than Omicron virus’ if his ‘persecution’ is not stopped
Bongbong Marcos’ conviction in tax case not a crime involving moral turpitude — lawyer
Marcoleta defends pol ads on ABS-CBN
IATF tightens border control, suspends entry of fully vaxxed travelers from ‘green’ countries
Don't miss out on the latest news and information.