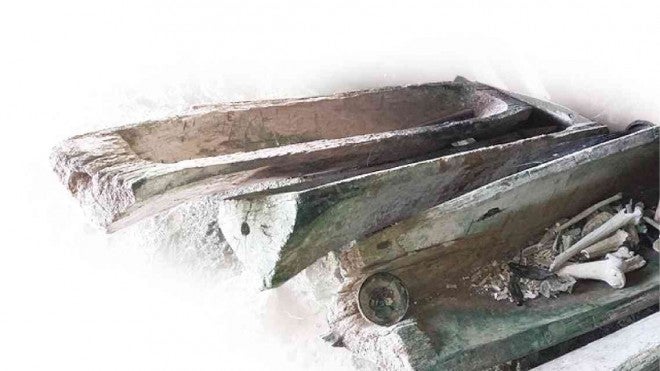 SOME of the few boat-shaped coffins that survived the plunder and vandalism that went unabated in a burial site in the cliffs of Basdio in Guindulman, Bohol province LEO UDTOHAN/INQUIRER VISAYAS

TAGBILARAN CITY—Heritage advocates are calling for the preservation and protection of the remaining ancient coffins in Guindulman town, Bohol that have been plundered and vandalized.

Only at least 20 boat-like coffins remain inside the caves on the cliff in Barangay Basdio, Guindulman town, about 97 kilometers from here, when there used to be hundreds of them.

These coffins have also shown discoloration and decay because they had been exposed to heat, humidity and rain.

Prof. Jose Marianito Luspo, local historian, said there is a need to preserve the boat coffins in Bohol before these disappear due to wholesale plunder and smuggling of artifacts.

“They form part of the relics we received from our ancestors,” said Luspo.

“This gives us a sense of continuity between the past and present and also a sense of respect for things that have passed,” he said.

“Remember that people who do not know their past will never prosper,” added Luspo, president of the Bohol Arts and Cultural Heritage Council.

The coffins, which are made of molave wood, are shaped like boats with the bow and stern appearing prominently.

The coffins are from six to seven feet long and each weigh from 50 to 70 kilograms. The bows of the markers point toward the sea due to the ancient belief that the boats are the dead’s vehicles to heaven.

Luspo said ship burial had been practiced in the towns of Anda, Jagna, Garcia-Hernandez and Carmen.

“It’s part of the belief system of the ancient people that death is like a river or passage to the other life which can be reached by a body of water,” said Luspo.

He said the ancient graves in Basdio are part of burial practices in the province.

Relatives would bury the remains of their loved ones in shallow graves. After several years, they would exhume the remains and place these in boat-shaped coffins which would be put in small caves that would become their final resting places.

It remains a mystery, however, how Boholanos of olden times were able to put the boat-shaped coffins inside the caves on the cliff in Basdio since the cliffs are very steep.

Nestor Deloy, 55, a former barangay captain of Basdio, said there used to be hundreds of boat coffins inside the caves on the cliff.

He said residents even avoided passing by the area for fear of spirits lurking in the caves.

Some fishermen in Basdio still perform an ancient ritual before sailing in a hope to get a bountiful catch.

Fisherman Elpidio Pacatang Jr., 46, said they would offer eggs, tuba and rice inside one of the caves.

And true enough, he added, fishermen who did so would return with a good catch.

But only a few boat coffins are now left inside the caves.

Some coffins were even ransacked by grave robbers who were looking for treasures, said Deloy.

In one cave, bones had been scattered. Other caves have been emptied of old human bones. Vandals had invaded the caves.

Today, only at least 20 boat-shaped coffins remain inside the caves.

“Who stole the boat coffins and where are they now? We don’t know,” Deloy said.

The municipality has enacted an ordinance designating members of Basdio Farmers and Fishermen Association (BFFA) to keep a close watch on the remaining boat-coffins since the caves are just a few meters from the marine sanctuary being maintained by BFFA.

Read Next
Charity alive in business for the dead
EDITORS' PICK
Kai Sotto continues to inspire Filipinos by sharing his passions and stories with Smart Prepaid
1Sambayan to nominees: Stick to word of honor
EDITORIAL: Good news, bad news
Alex Eala wins Grand Slam on Independence Day: ‘I hope I made my contribution to the country’
Trust Robredo’s political instincts – Kaya Natin! convener
Ahead of ONE: Full Blast II, Mongkolpetch warns Elias Mahmoudi: ‘Watch out for my fists’
MOST READ
Duterte, Mayor Sara unlikely to run under same slate in 2022, says Lacson
PH to have cloudy, rainy Monday — Pagasa
1Sambayan to nominees: Stick to word of honor
China cautions G7: ‘small’ groups don’t rule the world
Don't miss out on the latest news and information.