Political posters banned at Manila cemeteries; ‘even mine,’ says Erap 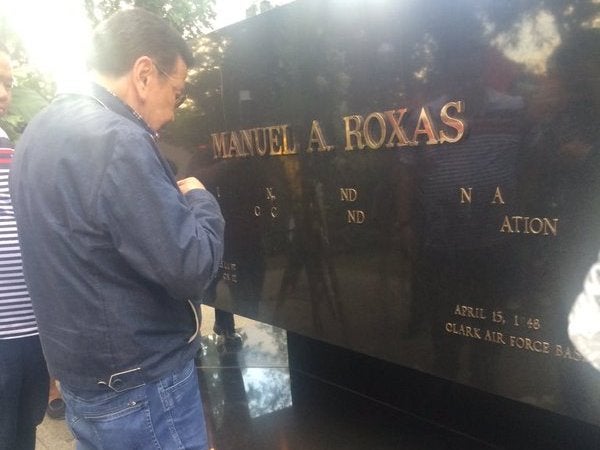 A tarpaulin poster promoting a candidate in the 2016 polls was hurriedly taken down on Saturday as Manila Mayor Joseph Estrada’s entourage of policemen and cemetery officials passed through an alley of Manila North Cemetery on the way to the tomb of his friend, movie legend Fernando Poe Jr.

Estrada said he ordered a ban on campaign posters in all public cemeteries in the city, where more than a million people are expected to visit the graves of their loved ones today.

“All posters are banned, even mine. There will be no exceptions. Even my old poster here, I had it removed,” said the mayor, who is seeking a second term.

Estrada arrived at the 54-hectare cemetery on the eve of All Saints’ Day, saying he intended to pay his respects to former presidents, mayors and other notable government officials buried there.

But he made special mention of his “good friend FPJ,” adoptive father of presidential candidate Sen. Grace Poe, who also visited his grave hours earlier.

Estrada said he did not inform the senator of his visit to the cemetery. “It’s better to be alone so I can pray more deeply.”

Showing off his blue Skechers trainers, Estrada walked from the main gate to FPJ’s tomb at the far-end of the cemetery, waving at the crowds who greeted him. Some of the more starstruck onlookers broke through his security cordon just to shake his hand and take “selfies” with him.

Estrada lit a candle and offered a prayer at the tombs of Manila Mayors Arsenio Lacson and Antonio Villegas, and of Presidents Ramon Magsaysay and Manuel Roxas, grandfather of one of Senator Poe’s opponents in the presidential derby, former Interior Secretary Mar Roxas. Erika Sauler

Joseph Estrada still has no presidential candidate to endorse