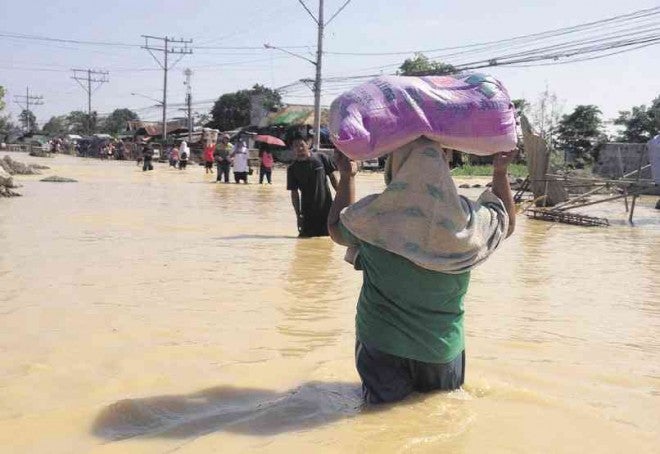 Typhoon “Lando”-affected residents has risen to more than three million this week, according to figures released by the the National Disaster Risk Reduction and Management Council (NDRRMC).

The NDRRMC said 697,027 families or 3,041,979 people were displaced by the most destructive typhoon to hit the country this year.

There are 5,805 families or 25,443 people still staying in 106 evacuation centers after floods and landslides swept their homes. Another 227,615 families or 989,673 people are temporarily staying with relatives or friends.

The NDRRMC said the damages sustained during the onslaught of Lando has climbed to P10.9 billion.

Earlier, the agency said Lando was the most destructive typhoon the Philippines has seen this year, given the high number of casualties and damages it caused to property.

The typhoon also caused damage to 134,867 houses in the same regions, of which 18,413 homes were totally destroyed.

As of Thursday, the death toll has climbed up to 48, with 83 injured and four victims still missing.

The most recently recorded fatality was Kimberly Manansala, 17, who drowned last Oct. 23 and whose body was recently recovered along the shore of Aringay, La Union.

The NDRRMC also monitored 956 typhoon-related incidents in the past week, with 937 floods noted in Ilocos, Cagayan Valley, Central Luzon and CAR.

Flooding in 679 barangay in these regions have already subsided.

The NDRRMC said eight provinces, two cities and 13 towns were placed under a state of calamity because of the destruction brought about by the typhoon.

Meanwhile, the government has begun clearing thoroughfares previously blocked due to landslides, floods and mud flows, with only 17 roads and four bridges still not passable to vehicles.

Power has been restored to areas previously suffering outages, except for the towns of Luna and Balaoan in La Union and Quirino, Sigay and Sugpon in Ilocos Sur, and Casiguran, Dinalungan and Dilasag in Aurora.