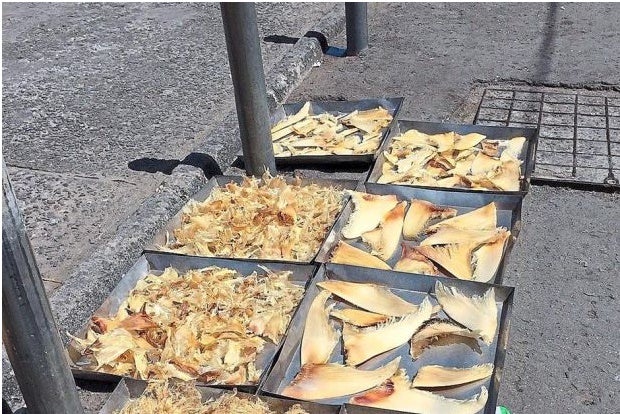 UNETHICAL LOOT Shark fins being dried out in the open outside a shop in downtown Kota Kinabalu. The Star/ANN

KOTA KINABALU, Malaysia—The sight of hundreds of shark fins being dried in the open outside a shop here is further evidence of the marine creature being intentionally hunted down, Sabah Shark Protection Association (SSPA) chairman Aderick Chong said.

Chong, who went to the shop yesterday after receiving photographs of the fins, estimated that they were stripped from at least several hundred sharks.

“The sheer number of the fins indicates there is a supply chain from the sea to the shops,” he said in an interview.

He said the large quantity of the fins being displayed in the open also appeared to ignore Sabah’s stand of pushing for shark conservation.

Chong said a shop assistant acknowledged that the shark fins were sourced locally from Sabah but claimed that most of them were old stock dating back to 2010.

“I find that difficult to believe,” Chong said.

Last month, Agriculture and Agro-Based Industry Minister Datuk Seri Ahmad Shabery Cheek said the Sabah government’s request for a ban on shark hunting and finning in the state was unnecessary.

He said sharks, unlike tuna, were accidentally caught by fishermen in Malaysian waters.

This indicated that shark hunting and the finning industry did not exist in Malaysia.

He said they would proceed with plans to set up shark protection areas at certain locations in the state.

Previously, Chong had maintained that a law banning the hunting and finning of sharks was just as important as a proposed sanctuary for them in waters off Sabah.

He said Malaysia was now the ninth largest shark producer worldwide, citing wildlife trade monitoring network Traffic reports that 231 tonnes of sharks were caught in this country between 2002 and 2011.

Chong also cited statistics which showed a decreasing amount of sharks being caught each year since 2003, indicating a decline in the population of the marine creature.