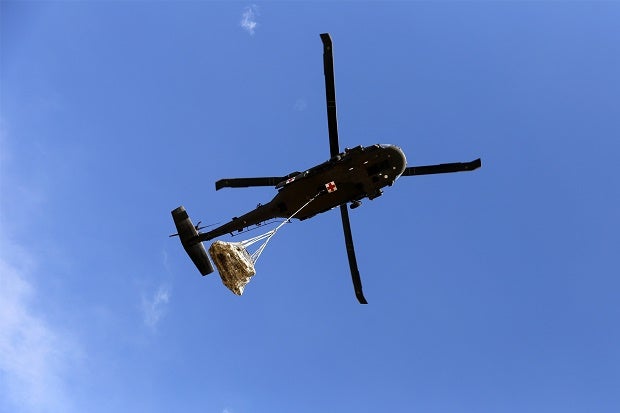 A helicopter carries remains of an adult Pentaceratops,Thursday, Oct. 29, 2015, in the Bisti-De-Na-Zin Wilderness area south of Farmington, New Mexico. The fossils are encapsulated in heavy plaster jackets. They’re being trucked to the New Mexico Museum of Natural History and Science in Albuquerque.JON AUSTRIA/THE DAILY TIMES VIA AP

ALBUQUERQUE, New Mexico — A National Guard Blackhawk helicopter plucked the skull of a baby Pentaceratops— encased in plaster — from the wilderness and airlifted it to a waiting cargo truck on Thursday morning. The team also airlifted the skull of an adult Pentaceratops that was found about 10 miles (16 kilometers) away.

The fossils — including the full skeletal remains of a baby Pentaceratops, a plant-eating dinosaur with large horns that once roamed what is now North America tens of millions of years ago — first caught the attention of paleontologists with the New Mexico Museum of Natural History and Science in northwestern New Mexico in 2011.

Thurday’s airlift was mostly a success. Muddy conditions prevented the team from transporting a third and final plaster jacket that contained the remainder of the baby’s skeleton. That will happen later.

Less than 10 adult Pentaceratops skulls have been unearthed over the past century, and this marks the first baby skeleton and skull to ever be recovered, museum curator Spencer Lucas said.

With other dinosaurs, researchers have found the shape of the skulls can change dramatically from adolescence to adulthood.

“There’s a lot of interesting questions,” Lucas said. “We know what the adult skull of a Pentaceratops looks like, but we’ve never seen a juvenile skull. So it will be interesting to see what the differences are in shape, the size of the horns and other kinds of features.”

Pentaceratops, its head decorated with five horns, lived about 70 million years ago. Paleontologists suspect these rhinoceros-like dinosaurs may have used their horns for defense, but evidence also suggests that the horns and the shield-like part of the skull could have been used to attract mates. It’s also thought they traveled in herds.

The remains of the young Pentaceratops appear to have been washed down through a streambed, as some of the skeleton has fallen apart. But how the animal met its demise is up for investigation, scientists said.

“Until we clean it up and really see how the bones are arranged and we look for things like tooth marks on the bone or something like that, we won’t answer those questions. But these are things we’re interested in,” he said.

It could take many months for the museum to process the fossils. Officials are hopeful they can go on display at some point.

Curators are planning to open one of the plaster jackets containing the fossils next week. The public will be able to watch through windows that offer a view into the museum’s laboratory.