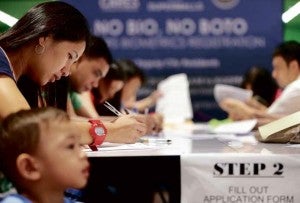 MANILA, Philippines — Apparently, a year and a half of the voter registration period is still not enough.

Youth leaders asked the Supreme Court, on Thursday, to stop the Commission on Elections (Comelec) from enforcing its Oct. 31 deadline for voters to enlist and register their biometric data for the 2016 elections, saying closing too soon would be too “illegal.”

This, just as last-minute registrants trooped to Comelec offices and designated malls to sign up and get their biometrics data recorded so they could vote in the presidential elections in May.

Comelec opened voter registration in May 2014.

The petition cited how Comelec Resolution Nos. 9853 and 9981 had “illegally set the deadline” for voter registration to Saturday, in violation of Section 8 of the Voter’s Registration Act.

Ridon cited a 2009 ruling on a similar plea, where the high court held that Comelec “cannot prematurely terminate the continuing registration of voters before the prohibitive period of election registration defined under the law.”

“There is existing jurisprudence that proves that setting an October 31 registration deadline is illegal,” Ridon added.

The certiorari and mandamus petition asked the high court to issue a temporary restraining order or preliminary mandatory injunction to stop the Comelec from imposing the Oct. 31 deadline.

It also asked the court to declare the assailed Comelec resolutions unconstitutional.

Ridon said he sent an urgent request to the Comelec en banc to extend the registration period last week.

“However, we feel that Comelec will again act on this request half-heartedly, that is why we seek relief before the high tribunal today,” Ridon said in a statement.  SFM