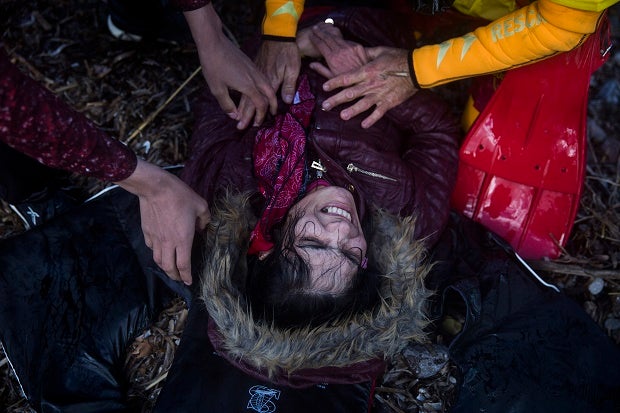 A woman reacts after her arrival in bad weather from Turkey to the Greek island of Lesbos on a dinghy , Wednesday, Oct. 28, 2015. The Greek coast guard said it rescued 242 refugees or economic migrants off the eastern island of Lesbos Wednesday after the wooden boat they traveled in capsized, leaving at least three dead on a day when another 8 people drowned trying to reach Greece. AP

LESBOS, Greece — The latest in the odyssey of hundreds of thousands of people trekking across Europe in search of a new life.

Authorities on the Greek island of Lesbos say 38 people are believed still missing after a wooden boat carrying migrants sank. Three people are known to have died.

At first light Thursday, a helicopter from the European border protection agency Frontex joined the search by Greek coast guard vessels off the northern coast of the island, hours after the dramatic rescue of 242 people.

At least 11 people — mostly children — died in five separate incidents in the eastern Aegean Sea on Wednesday, as thousands of people continued to head to the Greek islands from Turkey in frail boats and stormy weather.

Lesbos has borne the brunt of the refugee crisis in Greece, with more than 300,000 reaching the island this year — and the number of daily arrivals recently peaking at 7,500.

In a dramatic scene late Wednesday, dozens of paramedics and volunteers helped in the effort to assist the survivors, wrapping them in foil blankets and prioritizing ambulance transport.