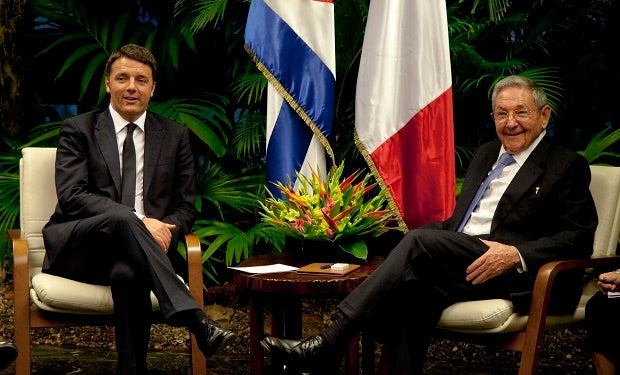 Cuba’s President Raul Castro, right, and Italy’s Prime Minister Matteo Renzi pose for photographer during their meeting at the Revolution Palace in Havana, Cuba, Tuesday, Oct 28, 2015. Renzi is in Cuba on a two-day visit. Cubadebate Via AP

HAVANA, Cuba—Italy’s Prime Minister Matteo Renzi kicked off a visit to Cuba Wednesday, the first ever by an Italian head of government, seeking a trade foothold as the communist island renews ties with the US and Europe.

Renzi, who is traveling with a large delegation of executives and investors, told a business forum that Italian construction and agricultural companies are ready to “provide the technology, know-how and machinery necessary to develop infrastructure and reduce Cuba’s hefty food imports.”

The island, which remains isolated by a US embargo, spends $2 billion a year importing food.

Renzi, who arrived Tuesday night, was later due to meet with Cuban President Raul Castro.

Cuba, which depends heavily on oil imports, is looking to increase the share of renewables in its energy mix from 4.3 percent to 24 percent by 2030.

And Italy, which is in the midst of a renewable energy boom, thanks largely to generous state subsidies, is keen to strike up partnerships in the sector.

Italy is currently Cuba’s eighth-largest trade partner and an increasingly popular destination for Italian tourists: the number of Italians visiting the island nation is up 34 percent so far this year, to 77,000—the fifth-highest number of any country.

European nations have shown a keen interest in deepening ties with Cuba as the United States continues negotiations on normalizing its relationship with the island after more than five decades of Cold War hostility.

French President Francois Hollande visited Cuba in May, and the Netherlands and Spain have called for the European Union to speed up parallel negotiations to restore relations suspended in 2003 over a Cuban crackdown on journalists and activists.

The visit is Renzi’s final stop on a Latin American tour that also took him to Chile, Peru and Colombia.

Raúl Castro visit to US looms