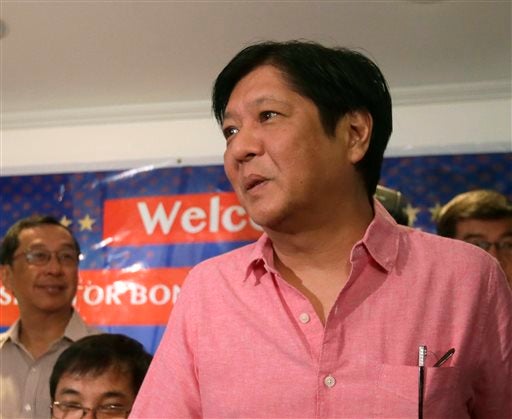 “While taking pride in his name may be ascribed to filial loyalty, it is the height of vulgarity and shameless insolence for Bongbong Marcos to say he has nothing to apologize for during the years when tyranny ruled the land,” said Ramon Pedrosa, chair of the executive committee of the August Twenty One Movement (Atom).

In a barangay health workers’ congress held on Wednesday in Urdaneta City, Pangasinan, Bongbong Marcos, said he would only apologize for something he did wrong.

“You tell me what I did wrong and how I hurt somebody, I will apologize to them,” said Marcos, who was a guest in the event.

But Marcos was old enough during the martial law years to understand the full impact of his father’s almost 20 years’ martial rule, Pedrosa said.

“To feign ignorance and brazenly demonstrate utter insensitivity to that long period of oppression is to be equally culpable as his father. He cannot take refuge under a feigned forgetfulness that trivializes the pathos of an entire nation,” Atom said in its statement.

“This is one instance when it becomes fully justified to say that the sins of the father should be visited upon a remorseless, unrepentant son,” the group’s statement said, adding that the crimes committed during the martial law regime were “firmly lodged in the collective consciousness of those who suffered untold cruelties from the dictator’s minions in the military and the police.”

Interviewed on a late-night TV news program on Tuesday, Marcos was asked about President Aquino’s remarks at the Foreign Correspondents’ Association of the Philippines forum earlier in the day, that had Mr. Aquino saying that Filipinos were not likely to return the Marcoses to power.

“What we’re doing is not trying to get more power, but trying to continue serving the country,” Marcos said, adding that “Maybe, (the Marcoses had been) vindicated, “because (the people) voted for us.”

After being allowed to return to the country following their 1986 ouster from Malacañang and subsequent exile in the United States, the younger Marcos successfully ran as Ilocos Norte representative and later, its governor. The province was his father’s bailiwick.

Atom said the stigma attached to the Marcos name could never be erased. The group scored Marcos, who is running for Vice President next year, for saying that fighting corruption was among his platform of government when his father and his cronies had been accused of plundering the country’s coffers.

“We can debate about the past. But that’s not what the people want,” Marcos said in response to President Aquino’s statement on the possibility of the Marcoses regaining political power.

“What they want is how we, as leaders, will help them uplift their living condition,” Marcos said, adding that people were more interested in how government could lower prices, eliminate illegal drugs, create more jobs and stop corruption, among other changes.

Marcos’ bid for the vice presidency has the backing of Senate Minority Leader Juan Ponce Enrile, the defense minister of the late dictator who later defected following a failed coup that triggered the 1986 Edsa People Power Revolution that eventually led to the strongman’s ouster.

He and Enrile have both “moved on,” Marcos said, adding that their falling out happened 30 years ago and a lot have transpired since then.

“We’ve both become senators and we’ve done a lot as senators. Maybe our attention was on our job because we have cleared the air, as they say,” Marcos said.

His father had committed mistakes, Marcos acknowledged in a TV interview, but then again, no one can claim to not having made any, he added.

His father’s biggest mistake was “trusting people (whom) he should not have trusted,” Marcos said, without naming names.

The senator also said there was no evidence that he himself had done anything wrong, as far as he knew.

“Who did I hurt, where did I commit a crime? I think there is no evidence concerning this. But if it (were) shown that I had done something that caused hardship or hurt someone, I will be ready to apologize,” he said.

“But if you want atrocities, we have a lot of atrocities to talk about,” Marcos said, citing the number of media killings under the Aquino administration. “Why is it that we don’t hear anything about that?” he asked.