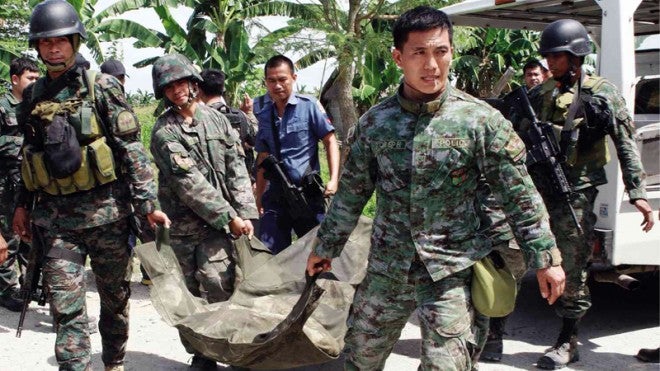 In this January 2015 photo, policemen carry the body bag of a comrade, one of 44 members of the elite Special Action Force of the Philippine National Police who died in a clash with Moro fighters in Mamasapano, Maguindanao province. The Department of Justice has issued a subpoena for 90 members of the Moro Islamic Liberation Front, Bangsamoro Islamic Freedom Fighters, and private armed groups in connection with the death of the SAF men. INQUIRER PHOTO

In a subpoena dated Oct. 20, the DOJ panel of prosecutors led by Senior Assistant State Prosecutor Roseanne Balauag ordered the respondents to answer the complaint for direct assault with murder and theft filed against them by the government’s fact-finding team from the National Prosecution Service and National Bureau of Investigation.

Prosecutor General Claro Arellano, chief of the DOJ’s prosecutorial arm, said the hearings for the preliminary investigation were set ‪on Nov. 11 and 27, both ‪at 10 a.m., in the department’s executive lounge.

The 90 individuals were accused of acting “in conspiracy with one another to attack, employ force, seriously intimidate or resist the 35 SAF commandos, who were uniformed police officers and, thus persons in authority.”