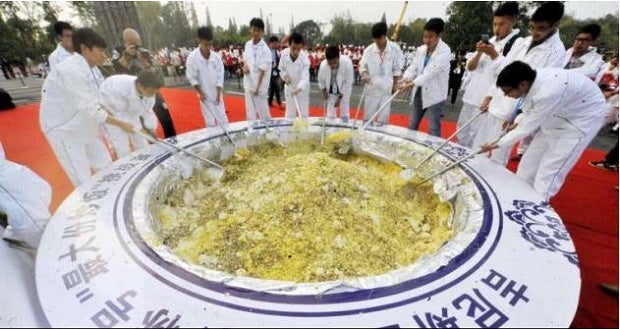 The city of Yangzhou, in Jiangsu province, China had its title revoked after 300 people successfully cooked 4,192 kilograms of rice in a giant bowl last Thursday.

But news later emerged that around 150 kg of rice was not edible and had been sent to pig farms instead of being delivered to local school canteens as earlier promised.

“The products created in any record attempt involving food must be given to people and not wasted. Hereby, we have notified the organizer that the record was revoked.”

Yangzhou had attempted the record-breaking feat as part of its 2,500-year anniversary celebrations.

The city is famous for its fried rice, with variations of the signature dish—common ingredients used include eggs, shrimp and pork—served in Chinese restaurants around the world.

An opinion piece in the People’s Daily lambasted the growing culture within China of pursuing “meaningless” and money-wasting world records, citing other events such as thousands taking part in an ice bucket challenge and the world’s biggest leather shoes, sofa and a steamed bun.

“The primary purpose of the Guinness World Records is meant to encourage people to challenge themselves and to surpass human limits,” it said.

“A lot of challengers who are so keen to challenge the Guinness World Record Book are merely after wealth and fame. Many just want to do it for fun. This trend of boastful and childish behavior is unhealthy and useless to our social development.”