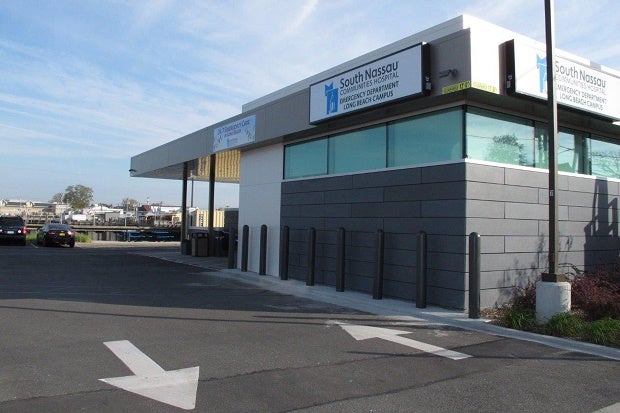 This Wednesday, Oct. 21, 2015, photo shows the entrance to South Nassau Communities Hospital’s newly opened emergency department in Long Beach, New York. The facility was opened this summer as part of an effort to provide emergency room services to residents of Long Beach, a barrier island outside New York City that was severely damaged in Superstorm Sandy in October 2012. The city’s existing hospital, the Long Beach Medical Center, was damaged in the storm and never reopened. AP

Virtually all its 9,000 homes were swamped; some had to be razed and rebuilt, while others required extensive repairs. The city’s 2.5-mile long boardwalk was wrecked by a storm surge that uprooted pilings and flipped floorboards as if they were matchsticks. Muck buried cars by the hundreds. Dozens of boats piled up in marinas like toys or rested on streets.

Three years after the Oct. 29, 2012, storm, Long Beach appears well on its way to recovery. A record 4.3 million beach passes were sold last summer; businesses have reopened; a new 24-hour emergency center has replaced a hospital destroyed by flooding. The local movie theater reopened this summer.

“Everything came back as well as it could; there’s no complaints about the city,” said Bradford Campbell, a 30-year resident who recently retired as a partner in a New York City accounting firm. He gave officials an A for their performance on storm recovery.

Deanna Weiss agreed as she strolled along the rebuilt boardwalk.

“There are still people who aren’t home yet,” she conceded. “But in general, we have our boardwalk back and that’s the heart of the city. I think they did a hell of a job.”

Estimating the number of the city’s 33,000 residents yet to fully recover from storm damage “is nearly impossible, because so many are at different stages,” city manager Jack Schnirman said.

Long Beach has so far received about $100 million in federal funding for infrastructure repairs, although city officials said that did not include money individual residents received for disaster relief; a city spokesman was unable to estimate how much that totaled.

“The city has come a long way in three short years,” Schnirman said. “There’s a lot more work to do, but we have made great progress.”

Federal funding included $40 million to replace the entire boardwalk, which was finished less than a year after Sandy struck. Schnirman said $4 million is being used to upgrade the city’s water system; $5.5 million went to sewer improvements; and the city is getting $40 million in state and federal funding to fortify the bay side of the barrier island.

Still on the drawing board is a $175 million Army Corps of Engineers project to replenish sand dunes and rehabilitate jetties along the Atlantic.

Mark Tannenbaum, president of the chamber of commerce, said 34 new businesses have opened in the past year. Some new businesses replaced others that closed after Sandy, he said.

“We had a great summer,” Tannenbaum declared of the city, which depends on a vibrant tourist economy. He and others remain concerned about replacing the Long Beach Medical Center, which had been on the financial brink of closing before Sandy’s flooding shut it permanently.

“We are lobbying for a new hospital that will meet the emergency medical needs of the community,” said Barbara Bernardino, president of the Beach to Bay Civic Association, which was formed in response to the medical center’s closure. “We are geographically isolated on a barrier island. It’s scary.”

This summer, the nearby South Nassau Communities Hospital opened a small 24-hour emergency care center up the street from the shuttered medical center. The emergency center is merely a stopgap measure, spokesman Joe Calderone said. South Nassau has hired a health care consultant to recommend what services a new facility might offer, he said.

Like other parts of Long Beach, Calderone said, “It is a work in progress.”