Comelec reminds 3M voters with no biometrics data: No extension 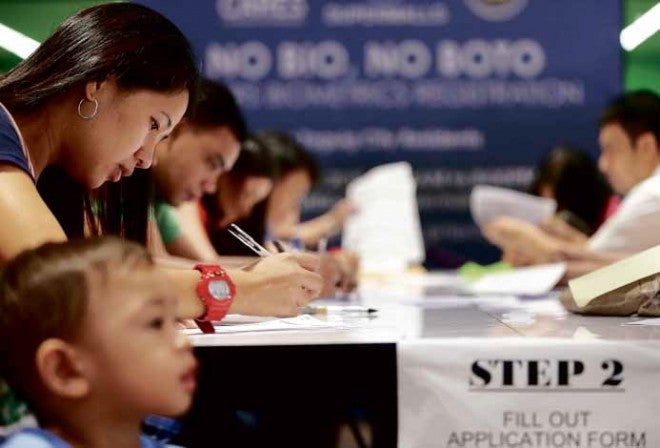 Some 3 million voters still have no biometrics data, the Commission on Elections (Comelec) said on Tuesday as it reminded the public that it has only four days before the deadline of voters’ registration for the 2016 polls.

In a press conference, Comelec spokesman James Jimenez urged voters to register before the deadline on October 31, 2015, adding that there would be no extension of registration.

He said the crowd sometimes get “unruly,” which the Comelec understands.

To address the concern, Jimenez said the Comelec has deployed information officers in satellite registration areas with high load to help registrants.

He said priority numbers are being distributed to registrants since the voter registration machine could only accommodate 250 people.

Jimenez said the Comelec en banc has yet to issue a decision on possibly extending voters’ registration in areas affected by typhoon “Lando.”

Jimenez said absentee voting would be allowed for government officials serving during the Election Day, members of the Armed Forces of the Philippines (AFP), Philippine National Police (PNP), and the media.

He said media should apply for local absentee voting in Comelec offices where they intend to vote.

He said media in the National Capital Region (NCR) should file applications at the Comelec NCR regional director’s office.