Lacson: Poe dropped me from slate in favor of Edu Manzano 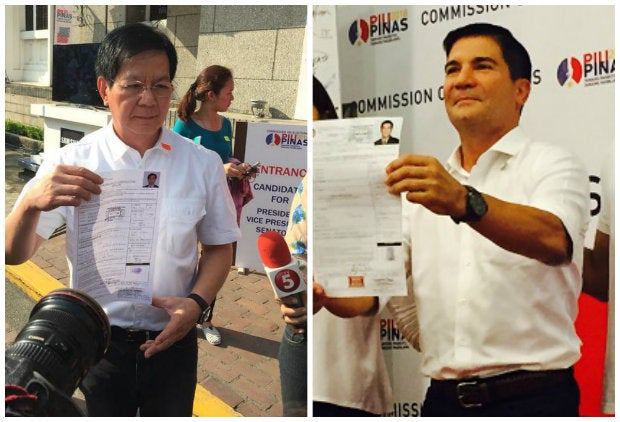 Senatorial aspirant Panfilo “Ping” Lacson disclosed on Tuesday that he was dropped from the senatorial slate of Senator Grace Poe in favor of another candidate.

“Senator Poe called me up last Friday and requested that I be substituted by Edu Manzano. I said, no problem, I’m okay with it,” Lacson said in a text message.

“As a background, she (Poe) invited me to meet with her twice to request that I be included in her slate. I agreed with a clear understanding that there will be no obligations imposed on either party,” he said.

Lacson first made this disclosure in an interview over ABS-CBN News Channel’s “Headstart” where he categorically said that Poe called him and requested “that I be dropped from the senatorial slate to give (way) to another candidate, Edu Manzano.”

“And I said yes, no problem with me. In the first place, being invited to be a guest candidate is a privilege and it can be withdrawn anytime,” he said during the interview.

After their conversation last Friday, Lacson said he thinks he is no longer part of Poe’s senatorial ticket next year.

Sought for comment, Poe explained that at that time, they were still finalizing the slate and they took into account that the former senator was already endorsed by two major parties— the administration’s Liberal Party (LP) and the United Nationalist Alliance (UNA).

“Senator Ping is a strong and worthy candidate and we were considering also those that had no party or less resources who would welcome our support. In fact, Toots Ople is also one of those we spoke with,” Poe said in a separate text message, referring to senatorial bet Susan Ople.

Asked then if Lacson and Ople would no longer be part of her slate, Poe said she would just make the announcement soon. Her running-mate, Senator Francis “Chiz” Escudero, earlier said they would announce their senatorial line up probably this Thursday.

“Sen. Lacson and I had spoken earlier prior to filing, so we were not at that time certain who the other candidates were. We had a good talk when we first met personally but he was also non-committal about the mechanics of campaigning with us,” the lady senator added.

Before disclosing that he was dropped from Poe’s slate, Lacson declared his support for former Interior Secretary Mar Roxas during the television interview.

Lacson cited several reasons why he is supporting Roxas. Among them, he said, was that the latter has no corruption issue, no disqualification cases and has no health issues unlike other candidates.

He said he could not also forget when Roxas testified for him in 2009 on the case filed against him in connection with the killings of PR man Bubby Dacer and his driver, Emmanuel Corbito. IDL