HIS ABDUCTION was supposed to be a prelude to his murder.

So claimed expelled Iglesia Ni Cristo (INC) minister Lowell Menorca II, who was seized by armed men in Bulan, Sorgoson province, in July and detained in a jail in Dasmariñas City in Cavite province.

Menorca on Sunday accused members of the INC advisory council of having him kidnapped and detained so he could be killed on the grounds that he was the blogger who exposed alleged corruption and other anomalies in the religious sect.

“A lot more people” suspected of being dissenters and their families were being “held against their will” at the INC Central Temple complex in Diliman, Quezon City, he said at a press conference in Manila. He was accompanied by his wife, Jinky, and lawyer Trixie Angeles.

INC officials said they would respond to Menorca’s claims at the proper venue, according to their counsel, Patricia Ann T. Prodigalidad. They were “surprised and saddened by the recent turn of events and the statements issued” by Menorca, she said.

“They will address the allegations of Mr. Menorca … and are confident that if treated fairly by authorities, they will be given due process and the opportunity to establish their innocence and to clear their names,” Prodigalidad said in a statement.

Menorca, the subject of petitions for the issuance of the writs of habeas corpus (to produce a detained person in court) and amparo (protection) filed in the Supreme Court on Wednesday, revealed that his kidnapping was led by a former police chief of Quezon City.

Acting swiftly, the high court granted the writs on Friday and remanded the petitions to the Court of Appeals for hearing.

Menorca said policemen from Quezon City also tried to kill him by lobbing a grenade into a dilapidated car he was riding near a cemetery in Dasmariñas. The grenade, however, did not explode and Dasmariñas policemen sent to finish him off took pity on him and just charged him with illegal possession of explosives.

After the case was dismissed, he was transferred to the INC complex in Quezon City on July 25 .

Angeles said the police official behind the kidnapping would be properly identified in court or in a lineup. The Court of Appeals will open hearings on the habeas corpus and amparo petitions on Nov. 3.

Menorca was rescued by National Bureau of Investigation agents at a house in Fairview, Quezon City, last week after being ordered moved by the INC council out of the temple complex on Oct. 21 when news about the petitions, filed by his brother and sister-in-law, broke out.

He said he was forced to sign quit claim, waiver and nondisclosure documents, as he was concerned about his family’s safety.

Menorca said the INC council members who had spoken to him before he was moved out had threatened that they would order the INC faithful to hold street protests now that INC executive minister Eduardo Manalo was the subject of the suit and might get arrested.

“They told me that during the time that the [council members] were the ones [sued], the whole church rallied. They told me, this time that [Manalo] is being attacked, I should expect the church to go to the streets again, and this time they will be hostile,” he said.

A sobbing Menorca held the hand of his wife, who was also sobbing, as he recounted to reporters his ordeal that began when armed men surrounded his chapel in Bulan, Sorsogon province, in July and abducted him in full view of people who were then celebrating the village fiesta.

He said a jacket was placed over his head and brought to an ambulance and later to a coaster on the way to Dasmariñas.

He said a minister spoke to him and he begged for the safety of his wife and daughter, who, unknown to him, were taken straight to the INC headquarters. “I told them they could kill me if they wanted but they leave my wife and daughter alone. Then they (abductors) claimed the convoy with my wife was intercepted by rebels. They didn’t know how I felt. They kept interrogating me,” he said.

Menorca denied the charge of illegal possession of explosives that was leveled against him in Dasmariñas, saying that the charge was based on the testimony of two construction workers who were paid P200 each. He said he and the two workers were taken to a prosecutor’s residence where he was charged.

The policemen said they were just following orders to charge him, adding that he alone could get himself out of trouble by admitting whatever he was being accused of.

Menorca said the arrangement was for him to be charged with illegal possession of explosives so he could just be detained in the city police station.

As details of his abduction and detention came to light because of media coverage, Menorca was released. He eventually ended up at the INC compound in Quezon City. 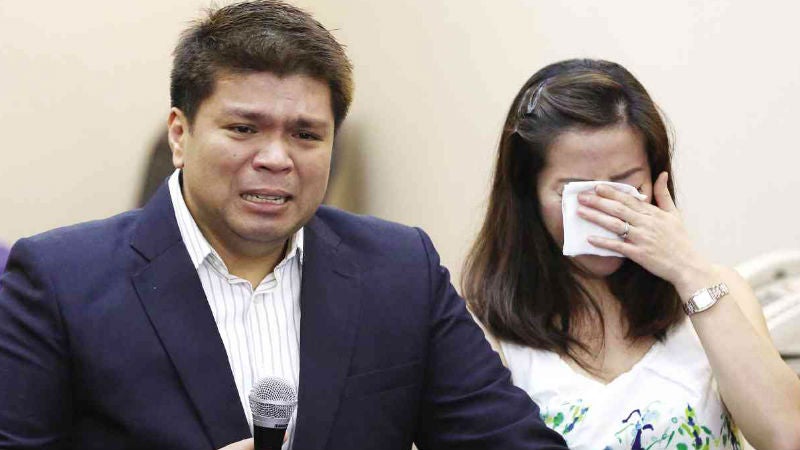 ‘KIDNAPPED’ Former Iglesia minister Lowell Menorca II, accompanied by his wife, Jinky, recounts to reporters on Sunday the ordeal that he and his family went through during their captivity. MARIANNE BERMUDEZ

Thinking that Manalo had ordered to have him placed under protective custody, he agreed to go to the compound. But he and his family were kept like prisoners for three months from July 25 to Oct. 21. He said he was once allowed go out to be interviewed by a media outfit under a “scripted” arrangement.

After they were transferred to Fairview in Quezon City last week, Menorca said he and his family asked relatives and their lawyer to work for their rescue as they were still worried about their safety since their neighbor was an INC official and several people continued to keep them under surveillance.

He said the people who kidnapped and interrogated him were going around the world visiting INC locals and “traumatizing, coercing and terrorizing lots of brethren still.”

He called on the INC council members, whom he said he used to treat as his uncles as his father was a former member, to stop covering up the truth and face the charges in court.

“Do not hide behind your positions … . You cry for separation of church and state but if you know it’s beneficial for you, you agree, but if not, you cry like a baby and [then mobilize] the brethren for street protests.”

Menorca said he was abducted because the INC council had suspected him to be blogger Antonio Ebangelista, who exposed supposed irregularities in the sect.

He said he was singled out not only because he was a “techie” but also because he was a former worker at the INC media network Net 25 and was close to Manalo’s brothers, who had also been expelled.

After he was brought to the temple compound, the INC council members admitted to him that he was not the mysterious blogger. “What they did was an unscientific way to getting their suspects. It’s like casting a net, whatever fish they could get, they would interrogate.”