The expelled minister of Iglesia ni Cristo who recently surfaced said that members of the Sanggunian, the highest administrative council of the powerful church, wanted him killed.

Facing the media on Sunday, Lowell Menorca II recounted the attempt on his life which took place in Dasmarinas City in Cavite province on July 17.

Menorca said that he was made to sit in an empty car when suddenly, a “round thing,” which was later identified as a hand grenade, was thrown inside the vehicle.

“After alighting the coaster, they made me sit in a car. They locked the door and immediately they left the scene. The driver of another car went to the backside and threw a round thing inside the car, at the backseat. I knew that it was a grenade,” Menorca said.

When the grenade did not go off, another alleged police officer was sent to kill him.

“When we were already in an isolated area, he was looking for a gun. That’s when I begged him. Sabi ko, ‘Please don’t kill me. Maawa ka na sa akin, sir. Ang katunayan po ay ministro ako ng Iglesia ni Cristo at may asawa po ako at isang anak.’ I was already crying to him. Sabi ko, ‘I am not a bad person. Huwag niyo naman po sanang hayaan na lumaki ang anak ko na walang ama,’” he said.

Menorca was able to persuade the officer not to kill him but it came with a price: he has to face a criminal charge of illegal possession of firearms.

“What was left for me to negotiate? So I said yes,” he said.

Menorca was arrested in Dasmariñas City on July 17 after allegedly threatening two construction workers with a hand grenade. He was freed on July 25 through INC lawyer Allen Blair Boy where he was subsequently brought to the INC compound in Quezon City.

Hours before the attempt on his life, Menorca and his wife were whisked away from their residence in Bulan, Sorsogon in a six-vehicle convoy after a church service on July 17. Officers from the Quezon City police were allegedly present during their abduction.

During the 17-hour travel from Sorsogon to Dasmarinas, the former minister said that he was repeatedly interrogated about a certain Antonio Ebangelista, a pseudonym of a blogger who revealed the alleged corruption inside the church’s ranks. Aside from the emotional turmoil he endured, Menorca sustained wounds from the handcuffs which cut his wrists.

“I asked them repeatedly to loosen the handcuffs because it hurt so much, my shoulders were about to fall off, my hands were bleeding. I kept on begging the police officers to even just remove my handcuffs, I’m not gonna fight them, they were all with guns.” 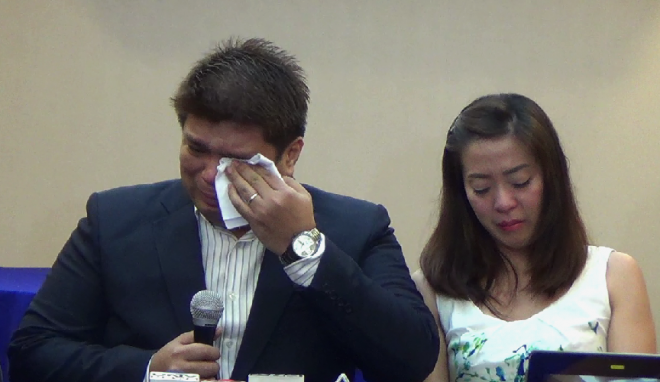 “I was begging and begging them for the life of my wife and my child. I just asked them, ‘Do whatever you want to me, just leave them alone.’ I asked them and begged them, whatever they want me to say, whatever they want me to admit, whether true or not, I will (admit it). They can shoot me if they want, they can kill me if they want, just leave my wife and my daughter alone. I asked where they were, they couldn’t give me anything, only trying to pacify me with the words saying ‘Okay lang sila,’” a sobbing Menorca said.

The officers even ridiculed him, joking that the convoy carrying his wife and daughter were intercepted by rebels.

Menorca claimed that he was detained by the members of the Sanggunian because he was being suspected to be one of the ministers who are critical of the church leadership.

“For three months we were there, for three months we were incarcerated. We were never free to go out even though they promised us, ‘Okay we can slowly introduce you to the outside world, slowly everything will be normal.’ I told them, ‘I don’t want my child growing up knowing that we are prisoners here’,” he said.

On October 21, Menorca and his family were “rescued” from an undisclosed house in Quezon City. In a video which was sent to INQUIRER.net on October 25, Menorca confirmed that they were kidnapped by the INC, saying that his statements in previous interviews were fed to him by the church leadership.

Menorca said that the order of the Supreme Court (SC) forcing INC to produce Menorca and his loved ones in court expedited his release.

The SC granted the petition of writs of amparo and habeas corpus filed by Menorca’s brother Anthony and Jungko Otsuka, the twin sister of the former minister’s wife, Jinky, on October 25.