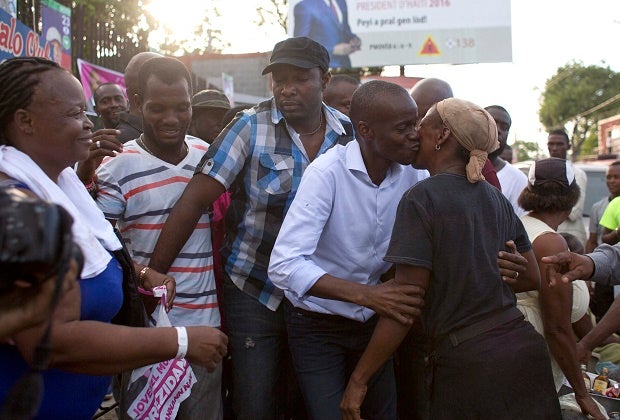 In this Oct. 11, 2015 file photo, presidential candidate Jovenel Moise greets a street vendor with a kiss during a campaign meeting in Carrefour, Haiti. A political newcomer, he is the anointed candidate of outgoing President Michel Martelly. Martelly often appears at Moise’s side, leading some to question whether Martelly would be pulling strings in a Moise presidency. AP

PORT-AU-PRINCE, Haiti — Haitians don’t lack for choice as they seek a leader who might be able to lift the nation out of poverty and turbulence. More than 50 presidential candidates are running on Sunday’s ballot.

The field is so crowded and confusing that there’s little clarity about who might be leading. Polls are unreliable and contradictory.

There’s greater agreement on the challenge facing the person who wins the inevitable Dec. 27 runoff: Spur the country’s chronically sputtering economy and wean it off dependence of foreign aid donors, who are largely funding this year’s roughly $70 million three-round electoral process.

“The government needs to stimulate growth so that the state can actually pick up the responsibilities that foreign assistance has been providing,” Kenneth Merten, the US State Department’s special coordinator for Haiti, told The Associated Press.

Among the best known names on the ballot is Jude Celestin, a former head of the state-run construction company who was the government-backed candidate in the 2010 race. He was eliminated from a runoff after his reported victory was challenged by foreign observers who complained of irregularities.

Others include President Michel Martelly’s pick, Jovenel Moise, a political newcomer who has called for restoration of Haiti’s army, and ex-Sen. Moise Jean Charles, a sharp critic of Martelly who brands himself as a voice for Haiti’s poor and disenfranchised.

More than 5½ years since Haiti suffered an earthquake that was one of the worst natural disasters of modern times, roughly 5.8 million voters are registered to cast ballots for the next president, 129 lawmakers and a slew of local offices.

Despite the extremely broad field, many Haitians seem frustrated by the choices and complain about the partisan bickering that led to political gridlock in recent years and prevented much serious discussion of issues during campaigning.

Final results are not expected until late November, according to the country’s Provisional Electoral Council.

Security is a widespread concern during Sunday’s elections. The roughly 12,500-member Haitian National Police will have to play a far greater role in maintaining security than it did in the last presidential vote due to a reduced number of UN peacekeeping troops. The United Nations has kept the force in Haiti since 2004, when a violent rebellion swept the country.