Lasers may ease pain for ‘napalm girl’ in AP photograph 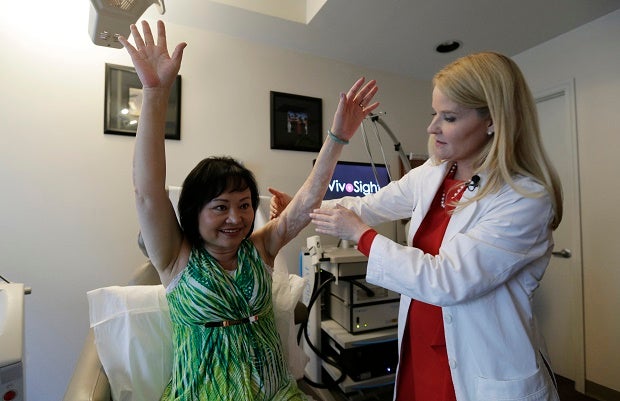 In this Sept. 26, 2015, photo, Dr. Jill Waibel examines Kim Phuc before the first of several laser treatments to reduce pain and the appearance of burn scars in her back and left arm in Miami. Phuc was injured by a napalm bomb in Vietnam 40 years ago. AP

MIAMI — In the photograph that made Kim Phuc a living symbol of the Vietnam War, her burns aren’t visible — only her agony as she runs wailing toward the camera, her arms flung away from her body, naked because she has ripped off her burning clothes.

More than 40 years later she can hide the scars beneath long sleeves, but a single tear down her otherwise radiant face betrays the pain she has endured since that errant napalm strike in 1972.

Now she has a new chance to heal — a prospect she once thought possible only in a life after death.

“So many years I thought that I have no more scars, no more pain when I’m in heaven. But now — heaven on earth for me!” Phuc says upon her arrival in Miami to see a dermatologist who specializes in laser treatments for burn patients.

Late last month, Phuc, 52, began a series of laser treatments that her doctor, Jill Waibel of the Miami Dermatology and Laser Institute, says will smooth and soften the pale, thick scar tissue that ripples from her left hand up her arm, up her neck to her hairline and down almost all of her back.

READ: Woman in AP “napalm photo” to honor her saviors

Even more important to Phuc, Waibel says the treatments also will relieve the deep aches and pains that plague her to this day.

With Phuc are her husband, Bui Huy Toan, and another man who has been part of her life since she was 9 years old: Los Angeles-based Associated Press photojournalist Nick Ut.

“He’s the beginning and the end,” Phuc says of the man she calls “Uncle Ut.” ”He took my picture and now he’ll be here with me with this new journey, new chapter.”

It was Ut, now 65, who captured Phuc’s agony on June 8, 1972, after the South Vietnamese military accidentally dropped napalm on civilians in Phuc’s village, Trang Bang, outside Saigon.

Ut remembers the girl screaming in Vietnamese, “Too hot! Too hot!” He put her in the AP van where she crouched on the floor, her burnt skin raw and peeling off her body as she sobbed, “I think I’m dying, too hot, too hot, I’m dying.”

He took her to a hospital. Only then did he return to the Saigon bureau to file his photographs, including the one of Phuc on fire that would win the Pulitzer Prize.

Phuc suffered serious burns over a third of her body; at that time, most people who sustained such injuries over 10 percent of their bodies died, Waibel says.

Napalm sticks like a jelly, so there was no way for victims like Phuc to outrun the heat, as they could in a regular fire. “The fire was stuck on her for a very long time,” Waibel says, and destroyed her skin down through the layer of collagen, leaving her with scars almost four times as thick as normal skin.

While she spent years doing painful exercises to preserve her range of motion, her left arm still doesn’t extend as far as her right arm, and her desire to learn how to play the piano has been thwarted by stiffness in her left hand. Tasks as simple as carrying her purse on her left side are too difficult.

“As a child, I loved to climb on the tree, like a monkey,” picking the best guavas, tossing them down to her friends, Phuc says. “After I got burned, I never climbed on the tree anymore and I never played the game like before with my friends. It’s really difficult. I was really, really disabled.”

Triggered by scarred nerve endings that misfire at random, her pain is especially acute when the seasons change in Canada, where Phuc defected with her husband in the early 1990s. The couple live outside Toronto, and they have two sons, ages 21 and 18.

Phuc says her Christian faith brought her physical and emotional peace “in the midst of hatred, bitterness, pain, loss, hopelessness,” when the pain seemed insurmountable.

“No operation, no medication, no doctor can help to heal my heart. The only one is a miracle, (that) God love me,” she says. “I just wish one day I am free from pain.”

Ut thinks of Phuc as a daughter, and he worried when, during their regular phone calls, she described her pain. When he travels now in Vietnam, he sees how the war lingers in hospitals there, in children born with defects attributed to Agent Orange and in others like Phuc, who were caught in napalm strikes. If their pain continues, he wonders, how much hope is there for Phuc?

Ut says he’s worried about the treatments. “Forty-three years later, how is laser doing this? I hope the doctor can help her. … When she was 18 or 20, but now she’s over 50! That’s a long time.”

Waibel has been using lasers to treat burn scars, including napalm scars, for about a decade. Each treatment typically costs $1,500 to $2,000, but Waibel offered to donate her services when Phuc contacted her for a consultation. Waibel’s father-in-law had heard Phuc speak at a church several years ago, and he approached her after hearing her describe her pain.

At the first treatment in Waibel’s office, a scented candle lends a comforting air to the procedure room, and Phuc’s husband holds her hand in prayer.

The type of lasers being used on Phuc’s scars originally were developed to smooth out wrinkles around the eyes, Waibel says. The lasers heat skin to the boiling point to vaporize scar tissue. Once sedatives have been administered and numbing cream spread thickly over Phuc’s skin, Waibel dons safety glasses and aims the laser. Again and again, a red square appears on Phuc’s skin, the laser fires with a beep and a nurse aims a vacuum-like hose at the area to catch the vapor.

The procedure creates microscopic holes in the skin, which allows topical, collagen-building medicines to be absorbed deep through the layers of tissue.

Waibel expects Phuc to need up to seven treatments over the next eight or nine months.

Wrapped in blankets, drowsy from painkillers, her scarred skin a little red from the procedure, Phuc made a little fist pump. Compared to the other surgeries and skin grafts when she was younger, the lasers were easier to take.

“This was so light, just so easy,” she says.

A couple weeks later, home in Canada, Phuc says her scars have reddened and feel tight and itchy as they heal — but she’s eager to continue the treatments.

“Maybe it takes a year,” she says. “But I am really excited — and thankful.”