We should be building police capacity, not others’ — Palace | Inquirer News

We should be building police capacity, not others’ — Palace 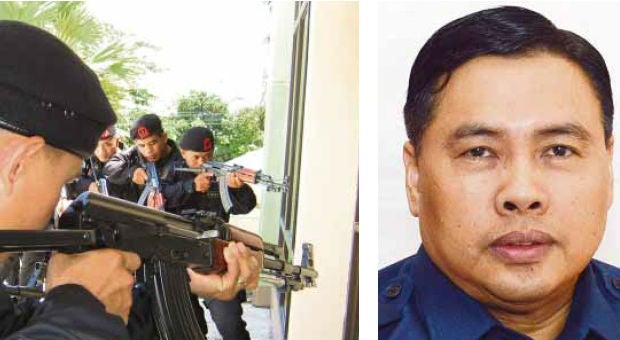 INDICTED PNP Chief Supt. Raul Petrasanta (right) has been indicted on multiple graft charges for his
alleged role in the anomalous sale of AK-47 assault rifles to leftist rebels. At left,members of the Special
Weapons and Tactics team try their AK-47 rifles during amock assault. INQUIRER FILE PHOTO

Malacañang on Saturday refused to comment on the Ombudsman’s decision to order the dismissal of a number of police officers but said the government should ensure that guns meant for the police force are not given to rebels.

Deputy Presidential Spokesperson Abigail Valte was reacting to the sacking of former Chief Supt. Raul Petrasanta, a close friend of President Benigno Aquino III who was dismissed for his involvement in the alleged sale of AK-47 assault rifles to the New People’s Army.

Valte did not weight in on the case but said, “From day one, President Aquino has been trying to upgrade equipment in (the) terms of the AFP and the PNP, at gusto po natin sa mga sundalo at kapulisan po natin napupunta ‘yan.”

(From day one, President Aquino has been trying to upgrade equipment in the terms of the Armed Forces of the Philippines and the Philippine National Police, and we want these equipment to go to our soldiers and police. It is their capacity which we should be building, not the capacity of other people.)

“If they are found accountable under our legal processes, then certainly they will have to face the consequences of that,” she said when asked about Petrasanta and other police officials accused of graft.

As for Ombudsman Conchita Carpio-Morales, Valte said, “The Office of the Ombudsman is an independent institution and you know that, in essence, she doesn’t take orders from anyone but her own mandate. So, I think, her performance and her record will bear her out that she is just performing the mandate and the duties of her office—parang nothing more, nothing less.” IDL