Is the Pope ill? Not true, says Vatican 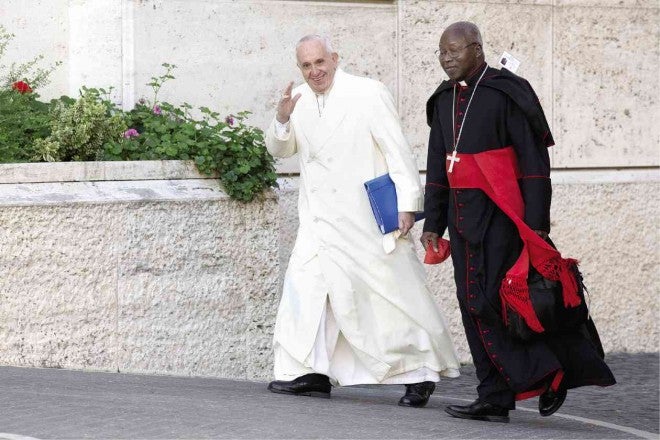 IN GOOD HEALTH Pope Francis looks in fine health as he arrives to attend a meeting of the synod of bishops at Vatican City. AP

VATICAN CITY—The Vatican denied Pope Francis is in ill health, saying his head is “absolutely perfect” after an Italian newspaper reported he has a small, curable brain tumor.

The Vatican spokesperson, the Rev. Federico Lombardi, said the report on Wednesday in the National Daily was “completely unfounded and seriously irresponsible,” as well as “absolutely inexcusable and unconscionable.”

The Vatican suggested the timing of the publication smacked of an attempt to manipulate the outcome of a hotly contested meeting on family issues at the Vatican.

Citing unnamed nursing sources, the National Daily said the 78-year-old Pope had been examined by a Japanese brain cancer specialist, Dr. Takanori Fukushima, who determined that the small dark spot on Francis’ brain was a tumor that could be treated without surgery.

It said Fukushima had traveled to the Vatican to examine the Pope.

The Ansa news agency, citing unnamed sources in Pisa, said Fukushima traveled to the Vatican in January and diagnosed the Pope then.

Lombardi dismissed the reports to journalists on Wednesday, issuing three separate and increasingly exasperated denials as the day wore on and after consulting with the Pope himself, who appeared in fine form during his weekly general audience.

Lombardi said no Japanese doctor had visited the Pope, the Pope had not traveled to Pisa, that no helicopters had landed in the Vatican from the outside and that no tests as described in the newspaper had been performed on the Pope.

However, he didn’t specifically deny that the Pope had a brain tumor, issuing only specific denials about irrelevant details, such as helicopter trips.

“I can confirm that the Pope is in good health,” Lombardi said. “If you were in the piazza this morning you would have seen that as well. And if you go on the trips with him, you know he has a small problem with his legs, but his head is absolutely perfect.”

The newspaper’s editor, Andrea Cangini, said he stood by the story.

In an interview with The Associated Press (AP), Cangini said the newspaper worked for months to cross-check the information with various sources from different places, and that there was “not the minimum doubt” that it was true.

Without going into details about Francis’ medical chart, Cangini said the tumor was small, could be treated pharmacologically and was in an area of the brain that wasn’t difficult to work around.

“The diffuse opinion among the doctors who are treating this case is that surgery is unnecessary and that the problem is under control,” he told AP.

Fukushima is a professor of neurosurgery at Duke University Medical Center in North Carolina. That he has been at the Vatican and met with the Pope is not in doubt.

On his Japanese-language blog, Fukushima has an entry from September 2014, complete with photos of him meeting the Pope in St. Peter’s Square.

He wrote that his father had served as a priest at the Meiji Shrine and was a senior priest at the Association of Shinto Shrines and that he was “overwhelmed” to meet with Francis.

In a blog post from January-February of this year, Fukushima wrote that he went back to the Vatican on Jan. 28, via helicopter, and met with several cardinals, including Cardinal Angelo Comastri, the archpriest of St. Peter’s Basilica.

Both visits were arranged on the sidelines of surgical duties he was performing in Rome and elsewhere, he wrote.

A woman at the front desk of Fukushima’s clinic in Raleigh, North Carolina, said she was told not to provide any comment.

Cangini said the paper had deliberated a long time before publishing the news, which it said it had confirmed months ago. But he said he had determined that Francis was a public figure and that his public persona outweighed his right to privacy.

The publication, however, comes at a delicate time for Francis, in the final days of his hotly contested synod on the family, which has shown a split among conservative and liberal bishops over how to convey the Church’s teachings on marriage, sex, homosexuality and other issues.

Several conservative bishops and cardinals have complained that the synod, which Francis called, is creating confusion and “anxiety” about the Church’s teachings.

The Vatican newspaper, L’Osservatore Romano, suggested that the report was aimed at manipulating the synod process.

“The moment chosen (to release it) reveals the manipulative aim,” of trying to make something out of nothing, L’Osservatore wrote.

A close confidante of Francis, the Rev. Antonio Spadaro, tweeted that the attempt may have been more personal.

“Now they don’t know what else to say … After all the lies they’re now inventing illnesses! A good sign…”

Late Wednesday, Dr. Fukushima issued a statement through the Carolina Neuroscience Institute, where he is director: “I have never medically examined the Pope. These stories are completely false.”

Lombardi said he had spoken to Francis about the reports.